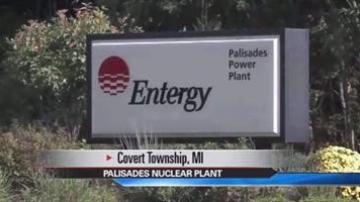 VAN BUREN COUNTY, Mich. -- Is it safe to live near a nuclear power plant? One group alleges there are high cancer mortality rates in Van Buren County because of the Palisades Nuclear Power Plant. A Notre Dame professor says he has enough confidence in how energy is stored, he wouldn't mind living next to one.

An environmental group, Beyond Nuclear, released a study they say links Palisades Nuclear Power Plant to a high rate of cancer deaths in southwest Michigan. We went to an expert to learn the facts behind the claims.

"It's some people's opinion. People have their opinions, and their rights to state them, but that doesn't mean they're right," said Peter Burns of the Energy Frontier Research Center.

Burns is a professor at Notre Dame, and Director of the Energy Frontier Research Center. He has dedicated his life to studying nuclear energy.

"Nuclear plants in the U.S. running under normal operating conditions, it's virtually impossible to pick up radioactivity downstream from the plant," said Burns.

The study released by the group Beyond Nuclear claims Van Buren County has the highest rate of cancer related deaths in all of Michigan because of Palisades.

He also says if you want to hide from radiation - you'll have a difficult time.

"When our doctor suggests we get a treatment using x-rays or maybe a bone scan using technetium-99m, we're perfectly happy to do that. In many cases, those are radiation doses much higher than one would get living near a nuclear plant," said Burns.

Burns says he can't rule out all problems with the Palisades Nuclear Power Plant.

Nuclear generating facilities are built to last about 40 years. Palisades has been operating 42 years.