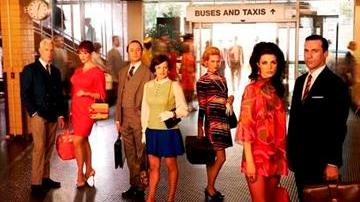 (CNN) -- During the past six seasons of the television show "Mad Men," audiences and fashion designers alike have obsessed over the cast's retro wardrobe.

So has Linda Przybyszewski, a University of Notre Dame history professor and the author of the upcoming book, "The Lost Art of Dress: The Women Who Once Made America Stylish."

The 1960s, the decade that "Mad Men" has inhabited thus far, was a time of tremendous upheaval that challenged the principles of the past -- and the fashions, she said. As women and African-Americans fought for social equality and men struggled to normalize their home and work lives, everyone's clothing changed.

We asked Przybyszewski to weigh in on how the "Mad Men" wardrobe evolved, and clue us in to what those shifts said about the time.

Fans don't yet know in what years the show's final season will take place, but count on some bold, colorful changes.

After all, at the start there were "four guys essentially wearing identical suits, and now we have four guys each one of them with distinctive facial hair, color, cut, garment," she said. "That's what the '60s did."