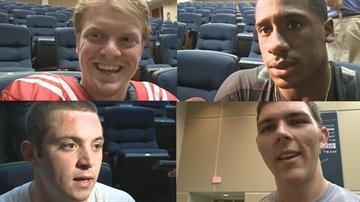 NOTRE DAME, Ind. – Each of the four quarterbacks up for the starting position threw reps during Saturday’s practice. Who will prevail and when will the quarterback debate end…who knows?

"I think if there’s no clear break as we go through the spring then I think this process continues to evolve as we work through preseason camp," said Head Coach Brian Kelly after practice.

First up you have junior Tommy Rees. He’s the guy with the most experience with a record of 12-4 as starting quarterback at Notre Dame.

He said the experience can put him a bit at ease.

"It adds some comfort level out there when you start going live and doing some things and understanding different ways with in the offense to get out of trouble," said Rees.

Rees said he knows he’s got things to work on this spring season.

"Not turning the ball over is a big one and that’s not a huge shocker," said Rees. "It’s something I need to improve on and just making the smart play all the time."

Next up you’ve got junior Andrew Hendrix who saw some playing time last season. He said he’s been building confidence ever since then.

"Right now I’m extremely confident. Any of the four quarterbacks are. You have to be to be able to compete," said Hendrix.

"The game’s slowing down for me. It makes it a lot easier, a lot less stressful, the games a lot more fun when you’re out there and you know what you’re doing," said Hendrix.

Everett Golson is a sophomore who kept a year of eligibility last year. He said he’s just working on improving.

"I just want to progress all over the board. A big thing for me is foot work, so I’m working on that right now," said Golson.

Golson said the competition for the top spot is keeping everyone motivated.

"It’s definitely a motivator being that we are athletes we’re very competitive just by nature but it’s been a great motivator for me and for the rest of the three," said Golson.

"They throw stuff at you so fast that you try to do so well, I get nervous sometimes, but the guys on the team do the best they can to calm me down, tell me to relax, and go out there to play football," said Kiel.

Kiel said he’s working on learning the playbook, and feels pretty lucky to be one of the Irish.

"When I first got on the practice field, I thought of the movie Rudy and I looked around and I was like, ‘oh my, like I’m here, I’m on the field with all these guys’, and there’s been so many great football players that came from so to be a part of this team is something special," said Kiel.

The players said they know what every decision Coach Kelly makes will be in the best interest of the team.

Kelly said you just never know what options the Irish will have at the end of this quarterback debate.

So let the competition continue!