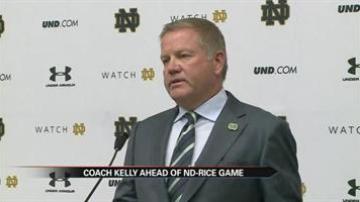 NOTRE DAME, Ind. -- On Saturday, Notre Dame's football season begins with the game against Rice at Notre Dame Stadium. It has been 25 years since the two teams faced each other.

On Tuesday, Notre Dame Head Coach Brian Kelly spoke to the media about the first game of the season.

"You're really trying to keep their attention to the details, because they're starting to wander a little bit in the sense that they know school is starting," said Kelly.

Already the Irish have seen their fair share of surprises.

Almost ten days ago it was announced that four players would not be able to play or practice until an investigation into alleged cheating is complete.

Coach Kelly made it clear the team is ready to make headlines by beating rice.

"Yesterday's practice was a lot different than the last two or three practices because now it is focusing on an opponent in Rice," said Kelly.

The Rice Owls were 10-4 last year. They wrapped up their season with a conference championship.

This year, Kelly is looking to wide receivers like Jordan Taylor-who averaged 15.4 yards a game--to lead an innovative offense.

"Outstanding wide out, I think one of the better ones that we will see during the year. Has the ability to do a little bit of everything, a very good route runner. We have evaluated him. We think he is a fine player," said Kelly.

"Very disruptive, can pass rush, very good against the run. Again, a guy that we have a great deal of respect for and will be considered one of the better players that we play against all year," said Kelly.

Kelly says the four players being investigated will have to sit out the game against Rice.