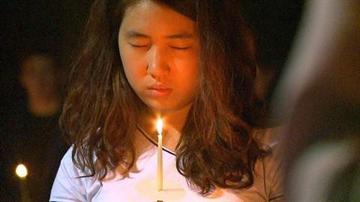 NOTRE DAME – Thousands of students, faculty, and community members attended a special mass held near the Hesburgh Library, Sunday evening. It was a time to remember and reflect, 10 years after the tragedy of September 11, 2001.

A decade after the horrific events of that Tuesday morning the memories persist. For some the pain remains as well.

Father John Jenkins recalled how the university handled the chaos, confusion and despair the terrorist attack created. Students gathered on the lawn of the south quad and a mass was held.

Sunday’s special mass was similar in some ways, and in others it was awe inspiring to those in attendance. Many said it was unlike anything they have ever seen or been a part of before.

The majority of current undergraduate students were in elementary school when the planes struck the world trade center buildings. Many remember the event by images seen on television and by the expressions on the adults they were around.

Jessica Vallejo, a sophomore at Notre Dame, was living in Maryland at the time. She was engrossed in Harry Potter and the Goblet of Fire when her father pulled her out of school that day.

She remembers this vividly because her father never picked her up from school. “I remember coming home and the first thing I remember is my living room full of provisions and the image of the second tower being hit by the plane,” said Vallejo. Her home was just 25 minutes from the Pentagon at the time.

Students like Vallejo found the incredible turnout touching. “I thought it was special because it said so much about the Notre Dame community,” said Carolyn Green, a Notre Dame sophomore.

Nearly every student used the term “unity” to describe what Sunday’s mass meant to them. “Seeing all those people silent and just reflecting for the entire mass. I even got choked up,” said Martin Walsh, a Notre Dame freshman.

As mass came to a close, nearly all in attendance joined a candlelight processional from the library to the Grotto. Some lingered for just a few moments, others for several minutes.

It took more than an hour for the last person in line to reach the Grotto. In the distance, a bagpiper played Amazing Grace.

The entire event was inspiring to many students like Vallejo, Walsh and Green; who say the mass was one of the most beautiful things they’ve seen and experienced. “So much of the student body, as well as the faculty and staff that showed up, helped show how much of a community we are; we are not just an educational institution. Notre Dame really does educate the heart and mind,” said Vallejo.