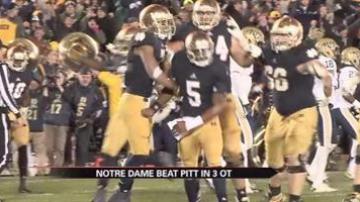 NOTRE DAME, Ind. -- It was a battle right here at Notre Dame Stadium until the final seconds and then some.

The Irish were the heavy favorites coming into Saturday's game against Pittsburgh and after a lackluster first three quarters, the Irish kicked into high gear in the final quarter.

After trailing for the majority of the game, the Fighting Irish were down to the wire with just over two minutes remaining in regulation, Notre Dame quarterback Everett Golson had to run in a two-point conversion to win the game.

After a fumble in the endzone, Pittsburgh just needed a field goal to win the game. But after a botched snap and missed field goal, the Irish were still alive and in their third overtime.

The Irish defense held Pittsburgh to a 44-yard field goal.

But on the Irish possession, Golson ran the ball in for the game winning touchdown.

The Irish are now looking towards next weekend's game on the road at Boston College.