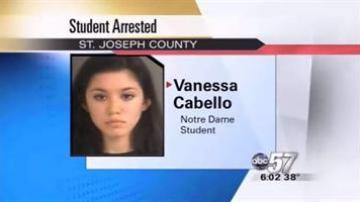 ST. JOSEPH COUNTY, Ind. -- A Notre Dame student was arrested on Tuesday afternoon in connection with an attempted stabbing that took place on campus.

Police said Cabello tried to stab a classmate with a knife! The incident happened on Dec. 4 in a Siegfried Hall dorm room.

Cabello claims she was raped by the male student she attempted to stab.