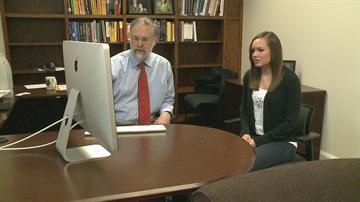 NOTRE DAME, Ind. – Notre Dame junior Courtney Rauch was diagnosed with breast cancer when she was just a freshmen in college.

"There was an element of shock because I was 19 years-old because I didn’t even think I could get this,” said Rauch.

Rauch who’s from Jefferson City, Missouri, was home on Fall Break her freshmen year when she thought something was wrong. She went to the doctor where they ran tests.
She then headed back to Notre Dame for a home football game. On her eight hour drive back her mom
called and said she needed to come back home. She had surgery the following week and then returned to school again.
Then a couple of weeks later she got the call that solidified the diagnosis on a Friday afternoon. “My mom called and said we got the results and its cancer. So I first heard that as a freshman,” said Rauch.
Doctors said they got clean margins when they removed the tumor, but then again, her sophomore year of college, Rauch found another lump which turned out to be benign.
After her most recent scare last March, Rauch is now a survivor, but she’s not done with breast cancer just yet.
Rauch, who is an Applied Math Major at Notre Dame, is working with Applied Mathematics and Statistics Professor Steven Buechler on looking at breast cancer data.
She came across his work when looking on the department’s website, when something close to her heart caught her eye.
“The title off it said something about breast cancer,” said Rauch.
She decided to ask him if she could help. “I was kind of intimidated that I would ask, ‘Can I help with your research?’ and he'd be like, ‘You’re a sophomore. I don’t think so.’ but he was willing to help,” said Rauch.
"Courtney came to me at the start of last year, as a major in our new department, and said she would be interested in working on breast cancer. She did tell me why,” said Buechler.
Buechler is examining molecular characteristics of breast cancer to see if chemo is the right treatment for certain patients.
“We apply mathematical methods and computations and analysis of data to make decisions,” said Buechler.
He’s been working on the research for four year, and was working alone until Rauch offered to help.
"I was looking for a problem that would have a clear impact when it was solved,” said Buechler.
Now Buechler is helping Rauch to make an impact on the battle she’s already beat.
"I'm able to add a more emotional level just because I was in the position trying to decide what to do trying to decide what was the correct treatment for me,” said Rauch.
The research is going well. "We're developing a clinical version of the test now, which could be used by a patient and an oncologist to help decide treatment,” said Buechler.
Buechler said they could be looking for a commercial partner within a month or two to develop the test, and will then need to go to the FDA for approval. He said they could be marketing the test within a couple years.
For Rauch now that she’s got her breast cancer chapter behind her, she’s looking forward to the rest.
"It nice that I was young because I have that behind me, and the chance of that ever happening again is like zero, so looking ahead I feel like my life is pretty good,” said Rauch.
Share this article: