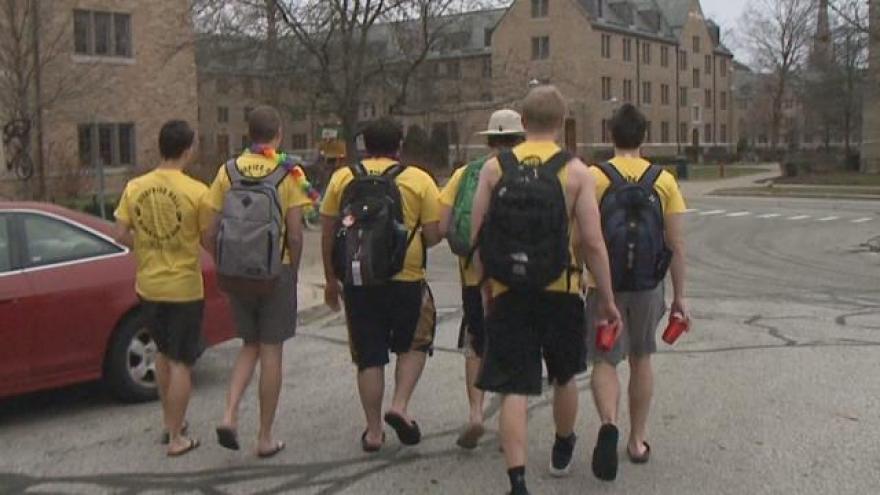 About 200 students from one of Notre Dame’s men’s dorms walked around campus in shorts and flip flops Wednesday to raise money for the homeless.

The men of Siegfried Hall say they were all freezing for good reason. Every year for their Day of Man fundraiser, they use red cups to walk around between classes and collect donations for the South Bend Center for the Homeless.

It was Harrison Lacy’s first year participating and he says, freezing or not, he was all in.

“Well, it’s a little bit cold. We’re out of the wind right now so it’s not too bad, but it’s about 30/31 degrees. Gonna go get some hot chocolate probably in a little bit and warm up,” said Harrison Lacy, a Freshman at Notre Dame, participating in Day of Man 2017.

His word of advice for the other students, “Just keep the body moving, it gets better,” said Lacy.

In the last ten years, the dorm-mates say they’ve raised about $82,000 and they’re main focus this year is to fill that gap and meet their $100,000 goal, no matter how cold it gets.

“The seniors, they’re freshman year it was negative two [degrees], so they’ve been telling us all these stories about how cold it gets, they were jumping in the snow,” said Lacy.

But he says no matter how cold it gets, he can’t wait to be part of the cause next year as well.

“It’s so much fun, honestly. Its good fun, it’s good for a great cause so what’s one day,” said Lacy.

100 percent of those proceeds go to the South Bend Center for the Homeless. If you would like to donate online, their site is open until March 20th. Just click here.