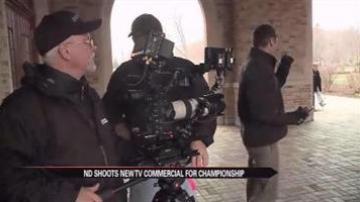 SOUTH BEND, Ind. -- Friday more than 600 Notre Dame students braved the rain to show their Irish pride to the entire country. They gathered to be featured in a commercial that will air during the BCS championship game next month.

The university was scrubbed down Friday to prepare Notre Dame for the national stage.

"I saw some of my friends getting filmed in the dining hall earlier. I actually tried getting in the background of that while I ate my pizza,” said sophomore Michael Shockley.

Camera crews spread out on campus capturing iconic Irish scenes to show the nation what Notre Dame is all about.

"For the National Championship game we thought we would produce something fresh and new and given the stage we thought this was a great opportunity to tell a little bit different story about Notre Dame,” said Dennis Brown, Notre Dame Spokesman.

Students were told to arrive at the Rockne Gate at 4 p.m. for their chance to represent the Fighting Irish in a 30 second commercial that will air during the BCS National Championship game.

"When this opportunity, this type of opportunity comes, it's not one to pass up,” said freshman Jimmy Boyle.

"I feel like this an opportunity that doesn't happen all that often, so I'm trying to take advantage of as many opportunities as possible that come with it,” said senior Tessa DeMerz.

Although the university isn't releasing any information about the content of the commercial, students are just hoping for one thing.

The crews took the 600 students inside the stadium and that will be the final scene of the commercial.