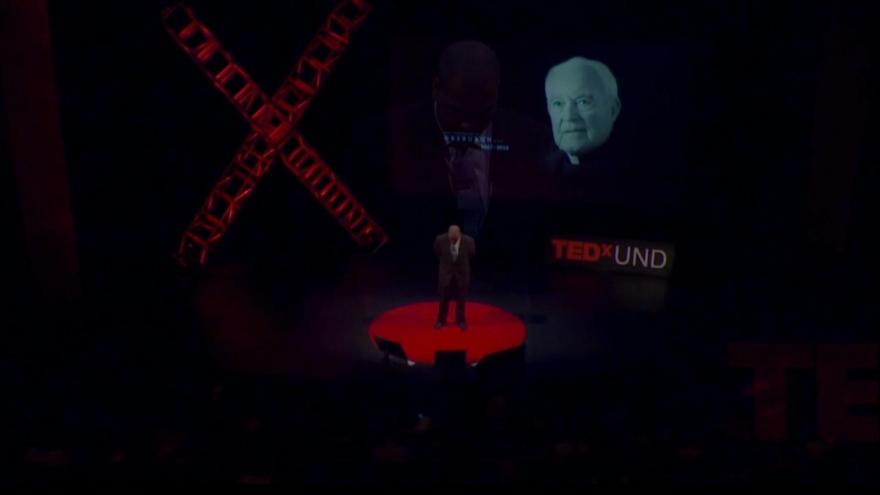 Notre Dame's campus was the host for a world-renowned speaker series Friday.

TED, more commonly recognized as TED Talks, is a global set of conferences to spread the exchange of ideas.

Many people on Notre Dame campus remembered Father Theodore Hesburgh for his activism and initiative.

That's why it was no surprise he was honored at Notre Dame's Ted Talks event highlighting tomorrow's leaders in innovation and advocacy.

The seminar titled “TEDxUND,” featured several keynote speakers sharing their take on the event's theme, “what if…”

Notre Dame Vice President Rev. Hugh Page Jr. led a moment of silence for the man he believes asked what if and changed the world.

“The most appropriate thing for us to do as a community is to offer a moment of silence in memory of the life and work Father Theodore Hesburgh and to commit ourselves to being good and effective stewards of his vision and his mission,” said Page.

Alumna and speaker Susan Jackson spent the last minute of her speech sharing a story about Hesburgh.

In her tearful memory, Jackson touched on the late priest's political impact.

“I'd like to leave you with my favorite Father Ted story,” said Jackson. “When he called in the results of his famously successful meeting of the civil rights commission, President Eisenhower said ‘how in the world did you get so much consensuses?' He said ‘Mr. President, you did not send me a collection of republicans and democrats and northerners and southerners, you sent me a bunch of fishermen.”

This event was no different as it featured sophomore international economics and philosophy major, Jackson Jhin.

“It was kind of a long process of preparation that we started actually earlier in the fall but it's been a great experience getting to know and meet the other speakers as well,” said Jhin.

After winning tickets to attend, he was inspired by the speakers and began crafting his own speech in the hopes he would one day be a speaker on that same stage.

“I spent the rest of that time trying to think of something I could talk about passionately and then just applied and spoke today.”

Jhin was also inspired by Father Hesburgh, who he remembered as an approachable icon for the school.

“He was really revered on campus,” said Jhin. “A lot of students were encouraged to go to the Hesburgh library on the 13th floor and read the paper to him in the mornings.”

Jhin was also motivated by his history.

“He's someone who was always a symbol because of a lot of the civil rights and social justice he built this university on,” Jhin said.