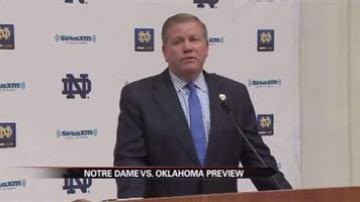 This weekend Notre Dame’s football team is on the road for their biggest test of the season, against No. 8 Oklahoma. Oklahoma is trying to climb in the rankings after their loss to Kansas State earlier this season while Notre Dame is trying to remain undefeated.

In the past 14 years the Oklahoma Sooners have only lost four games at Oklahoma Memorial Stadium.

"We've got so many other things, our guys got to worry about, whether they’re stepping with their right foot or their left foot Those numbers really are not something we bring up but you know, clearly, we know how good they are,” said Kelly.

Notre Dame has a strong program built on tradition. It's a well balanced team with strong, smart veterans and aggressive, determined youth.

"It's going to start for us on the defensive side of the ball and to keep the points down. And then obviously find a way to get some scores,” said Kelly.

According to the NCAA's strength of schedule rankings, none of the 11 FBS unbeaten teams in the country have had a tougher schedule than the Irish. But, the last two games have been close ones.

"I'd like to be 30 point wins, just like everybody else, but there's certainly a lot of components when you win close games against good teams. A lot can be gained from that,” said Kelly.

Kelly says, the lessons learned from those close games will be applied to this weekend's match up. But, this week and game day will be all about one step at a time.

"Regardless of the time in the game, how much was on the clock, winning, losing, when they focus so much just on their job, they don't even pay attention to that stuff, they don't even think about the scoreboard. You let the coaches do that,” said Kelly.

Coach Kelly also announced that Sophomore Everett Golson will be the starting quarterback on Saturday against the Sooners.

Golson did not play against BYU last weekend due to residual concussion symptoms but Kelly said Golson, like the rest of the team is excited for this weekend.

"There's an excitement, but there's also a realization that that excitement only gets you so far. You've got to prepare well, you've got to be detailed and organized so in times like these, we get that."

While trying to block out the intense hype, the Irish are focusing on the individual challenges the Sooners present.
Oklahoma has a balanced offense that is centered around their senior quarterback Landry Jones.
"Landry's been very effective and efficient with the football he's making big plays, they're balancing their running game in there. They're certainly an offense that's evolved since the first week against UTEP to where they are today," said Kelly.
In addition to the Sooners' solid offense, Kelly said Oklahoma's defense is as talented as any the Irish have seen this season. They have an extremely strong secondary with one of the top safeties in the country, junior Tony Jefferson. Jefferson was a 2012 Sports Illustrated Preseason All-American and he leads the team with 48 tackles.
The Sooners are also tied for the No.1 Red Zone defense in the country, an area Coach Kelly said the Irish need to work on on offense.
"We have to be better on 3rd down throwing the football and we have to be better in the Red Zone and those are areas of focus. If we're better in those two areas then our efficiency is going to jump up," said Kelly.
Share this article: