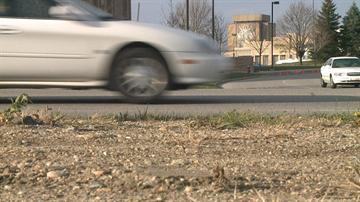 NOTRE DAME, Ind. – Irish fans had a packed schedule on Friday night with a football pep rally, hockey game and men’s basketball game. As tons of fans invaded campus, so did their vehicles.

Director of Notre Dame Security Police Department Phillip Johnson said they had plenty of people on hand to keep traffic running smoothly, but needed drivers to give themselves extra time.

“We’re asking all our fans to bring their patience as they travel to campus. Leave home a bit early if they can,” said Johnson.
Johnson said the majority of cars would be directed into the lot sandwiched between the Joyce Center and the Compton Family Ice Arena, but he had a few less traveled suggestions for people concerned with traffic.
“Douglas Road to Twyckenham to Bulla and into the Library Lot, an easy walk to the Joyce Center and no waiting in traffic at that point,” said Johnson.
He also suggested the Eddy Street Commons Parking Garage once the Notre Dame lots filled up because it’s still in walking distance of campus.
Share this article: