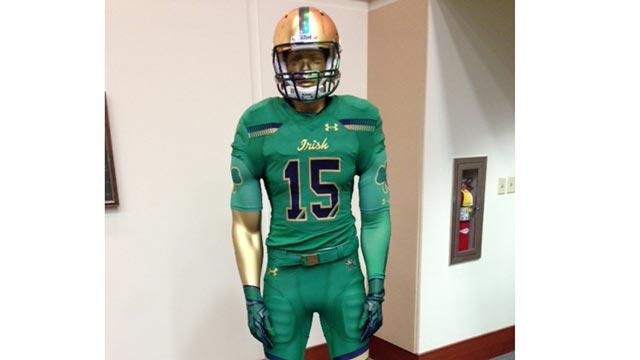 The Fighting Irish will be headed to Boston’s Fenway Park for this year’s Shamrock Series this fall.

They’ll be going head to head with Boston College on November 21, but they’re already getting geared up for the special game.

On Thursday Notre Dame unveiled their uniforms for the big game.

They’ll be decked in bright green jerseys to show the school’s heritage and new gold helmets with the Fighting Irish mascot.

“We’re such a traditional school which I love. I love putting on that gold helmet every week, but it’s nice to switch it up,” said linebacker James Onwualo.

“It’s going to be fun wearing the green in Boston with the Irish Catholic culture they have there. Everyone’s pretty excited,” said defensive line Romeo  Okwara.

There was one more surprise Coach Kelly had in store for one of their most hard working players.

Senior walk-on Josh Anderson thought he was there to model the new uniforms.

Coach Kelly awarded Anderson a scholarship for his senior year at Notre Dame.

“He’s taken more hits than any one of our backs. You know he’s a scout team player he’s done everything. He’s a good student, well respected by all of his teammates, you know we had an available scholarship as a senior he deserved it,” said Coach Kelly.