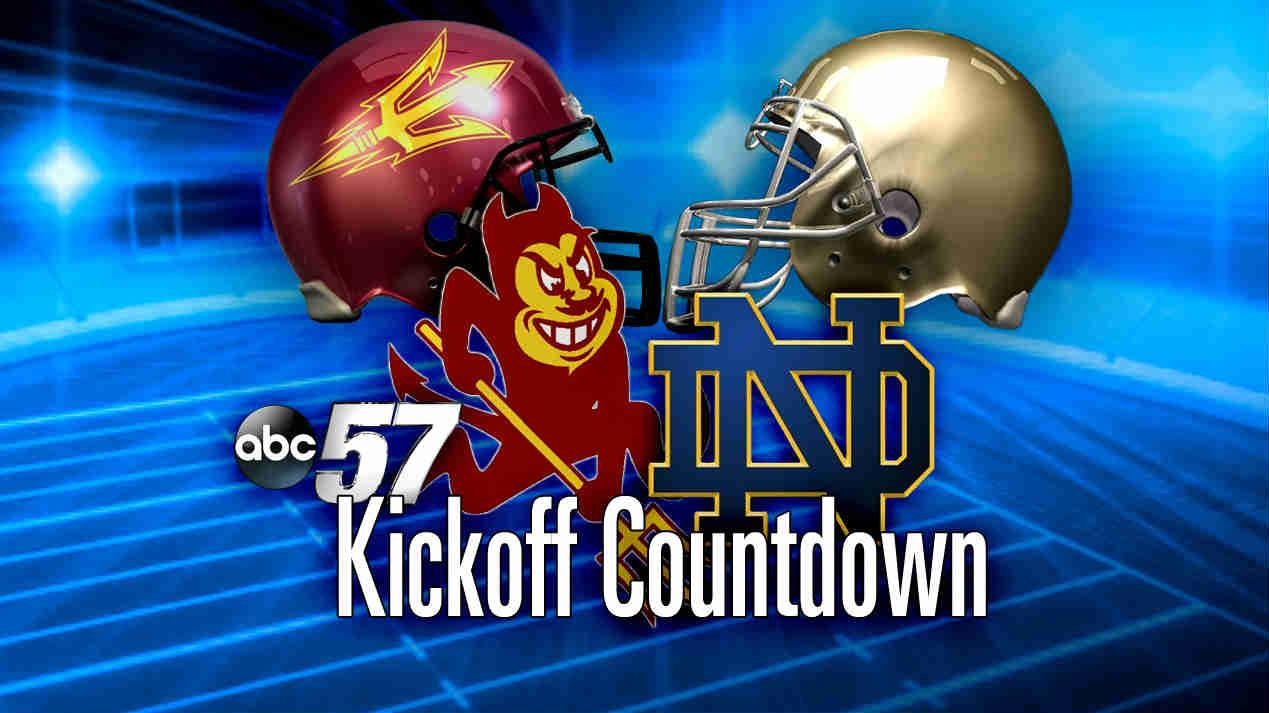 It was a warm and sunny Saturday in Tempe, Arizona where the #10 Fighting Irish of Notre Dame faced off against the #9 Arizona State Sun Devils.

It was a game that was expected be a high scoring shoot-out, but it would not start out that way.

Arizona State's offense took to the field first and after just six plays, the Notre Dame defense forced them to punt.

The Notre Dame offense then took the field for their first drive. The Irish took a long drive, going 59 yards in 14 plays, but they were stopped short by the Sun Devil defense and forced to attempt a field goal. Kyle Brindza's 46 yard kick was good giving the Fighting Irish a 3-0 lead in the first quarter.

On the next Arizona State drive, the Sun Devils got their offense going. After driving 45 yards in 9 plays,  the ND defense stopped ASU short, forcing them to also attempt a field goal. Zane Gonzalez split the uprights from 47 yards out, tying the game up at 3-3.

On the next ND drive Everett Golson had what would be his first turnover of the game. While trying to avoid being sacked, Golson fumbled the ball at the Notre Dame 13 yard line, turning the ball over to the Sun Devils.

Arizona State took no time taking advantage of the Irish turnover, scoring on the very next play. Taylor Kelly's 13 yard pass was complete to Jaelen Strong for the score, giving ASU a 10-3 lead.

The next Irish possession would not go much better. On the first play of the drive, Golson his first interception of the game. The pass was picked off by Marcus Hardison at the Notre Dame 23 yard line.

The Sun Devils again took very quick advantage of the Irish turnover, taking only three plays to score.  The touchdown came on a 1 yard run by Demario Richard, giving ASU a 17-3 lead, still in the first quarter.

The second quarter would not start off much better for the Irish offense. Everett Golson threw another interception, this time picked off by Damarious Randall and returned 59 yards for an ASU touchdown. With this play Arizona State increased their lead to 24-3.

After an Irish punt on their following drive, the Sun Devils offense would get right back into another quick drive going 64 yards in just 5 plays. This drive was finished off by a 43 yard touchdown pass to Cameron Smith, increasing the ASU lead to 31-3.

A couple of drives later, the Notre Dame defense finally began to click, but a tough penalty for Defensive Offside on 4th and 1 kept the Sun Devils drive alive. Arizona State was only able to convert this drive into a field goal, though, after being stopped at the ND 11 yard line. Zane Gonzalez split the uprights again making the Irish now down 34-3 with little time left in the first half.

Notre Dame's offense did get rolling right before the half though, driving 75 yards in just four plays. This drive, mostly helped along by a 59 yard pass to C.J. Prosise, was capped off by a 9 yard pass to William Fuller for the score.

At halftime the Sun Devils led the Fighting Irish 34-10 and, with the amount of turnovers Notre Dame had committed and how poorly their offense was playing, many were already calling this game a “blowout”.

The second half started off with yet another Irish turnover. After driving all the way into the red zone, Everett Golson threw yet another interception, this time at the ASU 6 yard line.

Notre Dame's defense again stood strong, forcing multiple three-and-outs and punts by Arizona State. The Irish offense took advantage of the field time, putting together a solid 7 play, 56 yard drive. Cam McDaniel ran in the score for the Irish from 1 yard out, closing the gap to 34-17.

The Irish, trying to keep their momentum going, began another strong drive, driving 63 yards in 8 plays, but a turnover would stop them again. Golson had another fumble, this time recovered by ASU at their own 22 yard line.

The Irish defense were determined to keep their team in the game and created a turnover themselves on the very next drive. Matthias Farley returned the pick 27 yards, giving the Irish possession at midfield.

After forcing another ASU punt, ND put together their quickest drive of the game, taking only 2 plays to go 59 yards for the score. It was a 25 yard touchdown pass to Amir Carlisle that narrowed Arizona State's lead to 34-31.

After being down by 31 at one point, the Irish were fighting their way back, and proving that they had a real opportunity to win this game.

Arizona State, however, answered back with their next possession, with a quick drive of their own. The Sun Devils drove 75 yards in just 5 plays, scoring a touchdown on a 4 yard pass to Demario Richard, and increasing their lead to 41-31.

Knowing that they needed to score quickly, Notre Dame went right back to their air attack, but just three plays into their drive, Golson threw another interception. Lloyd Carrington picked this one off and returned it 58 yards for a Sun Devil touchdown. ND's hopes of a comeback were beginning to dissipate, down 48-31 with very little time left in the game.

With their final chance to score, Golson again tried to throw the ball down field but bad timing and pressure resulted in three incomplete passes and an sack at the ND 8 yard line, turning the ball over on downs.

Even with a significant lead and very little time left on the clock, Arizona State took full advantage of a 1st and Goal possession, using all four of their plays to score another touchdown. This score came on a 2 yard quarterback keeper from Taylor Kelly, putting an exclamation point on a decisive victory by the Arizona State Sun Devils.

In the end, the Fighting Irish fell by a score of 55-31, keeping the Sun Devils in the race for the College Football Playoffs, while most likely ruining any chance Notre Dame may have had.

Notre Dame, now 7-2 on the season, will try to bounce back from this loss on Saturday, November 15 when they welcome the Northwestern Wildcats to South Bend, Ind.