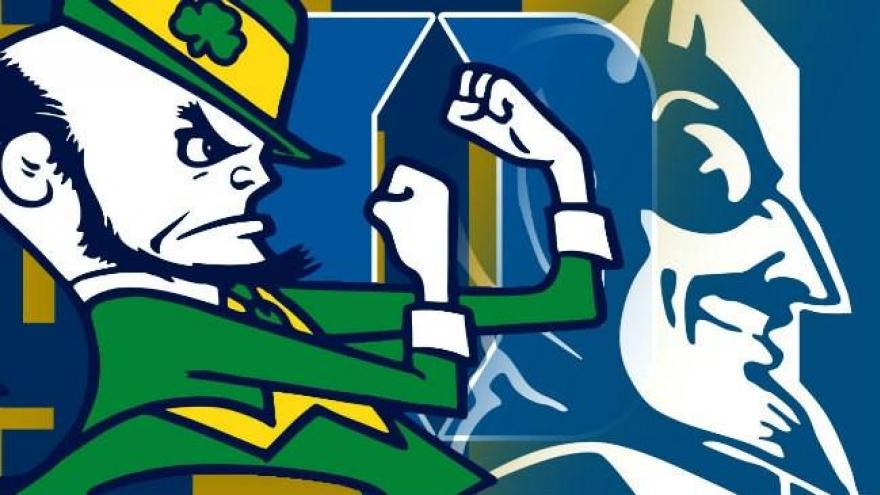 The Notre Dame Fighting Irish were looking for a win as they took on Duke, Saturday at Notre Dame Stadium.

The coin toss was won by Duke and they chose to defer to Notre Dame.

On the first possession with 12:30 to go, the Irish wasted no time getting on the board. ND with a touchdown putting them up 7-0.

After Duke had their turn with the ball, Notre Dame quickly made it to the endzone with about 10 minutes to go in the first quarter.

Duke’s Shaun Wilson responded on the next kick, dodged defenders and took the ball 96-yards for a Blue Devil touchdown. Notre Dame 14, Duke 7.

With about four minutes left in the first quarter, Duke broke free from the defense and ran up the middle for another touchdown that would tie the game at 14.

ND’s Kevin Stepherson fumbled the ball and recovered it himself to give the Irish a critical first down with 1:30 left in the quarter.

The Irish attempted a field goal before the end of the quarter, but the kick went wide and the game remained tied at 14.

Notre Dame would take a 13-yard loss in the second quarter when Malik Ziare took a sack from the Blue Devil defense.

Duke would then score another touchdown on a punt fake with 6:35 to go in the quarter and put the Devils on top after the kick 21-14.

The Fighting Irish answered right back with a touchdown as Dexter Williams dragged a defender into the endzone with him. Tie game again at 21.

The score continued to climb quickly as another Blue Devil touchdown was scored with 1:22 left in the half. Duke 28, Notre Dame 21 after the extra point.

Duke's Breon Borders aggressively batted down one of DeShone Kizer's passes as the Irish tried to find the endzone before halftime.

The score of the game would stand with Duke in the lead at 28-21 headed into halftime.

With 10:29 left in the third quarter, Duke cornerback Bryon Fields, forced a fumble by Notre Dame and the Blue Devils recovered the ball. It would be first and ten for Duke.

Notre Dame answered with a big play of their own. ND linebacker, Nyles Morgan sacked Duke's quarterback to bring on a fourth down with about 8 minutes left in the quarter.

The Irish would have an agressive 83-yard drive down the field, all within 6 plays. ND sophomore Josh Adams took the ball to the endzone and the game was tied at 28 after the extra point.

On the following Duke possession, Daniel Jones throws long to one of his receivers but ND's Donte Vaughn collects the ball and his first career interception. ND possession with two minutes to go in the third quarter.

The game remained tied at 28 going into the final quarter of the game.

Only 7:46 left in the fourth quarter and Kizer would connect with Equanimeous St. Brown in the endzone for a much needed touchdown. The extra point was good and Notre Dame took the lead for the first time since the first quarter. Notre Dame 35, Duke 28.

Duke scored on the following possession as Anthony Nash ran the ball 63-yards to the endzone. Tie game, 35-35 after the extra point.

With 4:10 left in the fourth quarter, Kizer launched the ball down the field and it fell into the hands Duke's Deondre Singleton. The Blue Devils would take over from the ND 45.

A field goal made by Duke would put them ahead of the Irish by three. Duke leading 38-35 with just over one minute left in the game.

Luck would not be enough for the Irish. A pass from Kizer would be dropped on fourth down, ending the game.

The Irish will play Saturday, October 1st at Syracuse. Kickoff will be at noon.