Notre Dame vs. Stanford game is an NCAA first 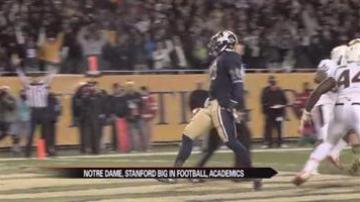 NOTRE DAME, Ind.-- Saturday's game against Stanford is  the first meeting of two top 20 teams both academically and in the football polls.

Notre Dame is No. 17 on U.S News & World Report's list of top universities and Stanford comes in above most Ivy Leagues at No. 6.

In the AP Top 25 football polls, those numbers are pretty similar. Notre Dame is No. 7 while Stanford is No. 17.

On Tuesday, Irish football coach Brian Kelly said, "It doesn't get enough attention. That you have two outstanding academic institutions that are ranked so high in terms of graduation rates but also on the football field."

The academic statistics for these two schools contradict the recent stereotypes that institutions need to lower their academic standards to achieve athletic results.

Between the University of North Carolina's scandal for lowering their academic standards for their athletes, Ohio State's third string quarter back, Cardale Jones tweeting: "Why should we have to go to class if we came here to play FOOTBALL, we ain't come to play SCHOOL classes are POINTLESS," and finally Allen Pinkett's comment's earlier this season about every good football program needing a few "bad citizens," it's safe to say, the academic and athletic controversy has been abundant this season.

But, Saturday's game disproves the controversy.

"I know that's one of the reasons I came to Notre Dame. I wanted to make sure everyone knew you could do it in the classroom and you can certainly do it on the football field," said Coach Kelly.