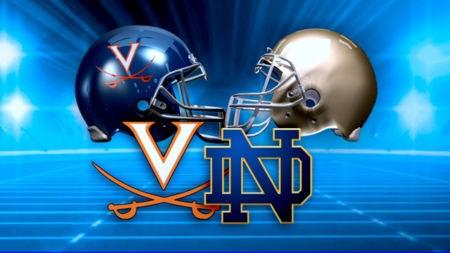 Week two of the 2015 Notre Dame Fighting Irish football season brings their first match-up in Charlottesville to meet with the Virginia Cavaliers.

After a win back home, Brian Kelly and the NO.9 ranked Fighting Irish are looking to beat the Cavaliers who lost to UCLA in week 1 of college football.

Kick-off took place around Notre Dame would have the ball first and C.J. Prosise would go for a big run for a first down.

Zaire's scrambled to pick up 15 yards soon after despite Virginias good defense on the play.

Notre Dame would successfully fake a field goal and tight end Durham Smythe would score a touchdown. The Irish lead 6-0 after a previously failed two-point conversion.

Justin Yoon's field goal attempt for Notre Dame would put them up 9-0 within a couple minutes to the end of the first quarter.

The Cavs score a touchdown after faking a hand-off at the beginning of the second quarter. Notre Dame would still lead 12-7.

UVA would score a touchdown after a successful reverse pass. The Cavs take the lead, 14-12 with 3:04 left before halftime.

Beginning in the 3rd quarter, the Cavaliers would gain more free yards, a total of 30 on this drive, after pass interference against Notre Dame.

After a having no luck with a field goal attempt by Virginia, Notre Dame holds and moments later an incompletion for Zaire shows he was not throwing doing so well in this game by the third quarter.

The Irish would remain down by two points in the third quarter.

Notre Dame’s Malik Zaire would pass to Fuller for 59 yards and an additional 6 points on the scoreboard.

Ziare takes it down to the 17 after a 39 yard run from scrimmage. However the field goal attempt would be no good from 34 yards.

Malik Zaire was carried off the field due to injury with just :54 left in the third quarter.

After Prosise runs it in 24 yards for the touchdown, Notre Dame leads 26-14 at the end of the 3rd quarter.

An update states Zaire suffers injury to his ankle and is being looked at by medical officials.

Virginia scores a touchdown when Matt Johns brings it in himself and Virginia still trails 26-21 in the fourth quarter.

Johns would let the pass go in the fourth quarter and Mizzell, who was wide open in the end zone, would drop the ball there after it hits his hands.

The Cavs score a touchdown and are now in the lead 27-26 in the fourth.

After nearing the field goal range, the Irish would score a touchdown.

New quarterback, DeShone Kizer passes this one to Will Fuller 39 yards.