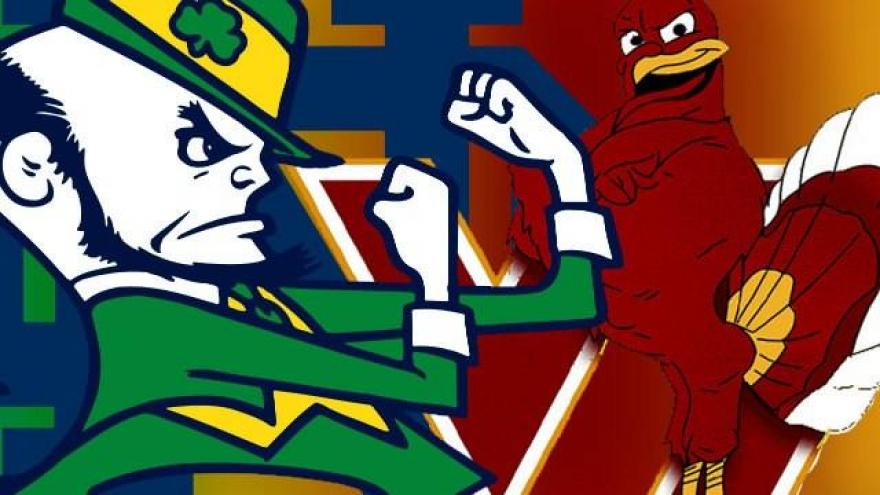 Coming off their last win, The Notre Dame Fighting Irish would take on the Virginia Tech Hokies under Irish lights Saturday looking to add another victory to their 4-6 record.

Notre Dame would need to succeed in the next two games to become bowl eligible for the playoffs.

The Irish would receive the ball to start the game. On the first down, Virgina Tech was offside and this would set up Irish quarterback DeShone Kizer for a 22-yard pass to Equanimeous St. Brown.

The Irish would be the first to score. Just three minutes into the game, running back Josh Adams took the ball over the goal line and Justin Yoon kicked the extra point, putting Notre Dame up 7-0 over Virgina Tech.

With 11:51 to go in the first quarter, VT quarterback Jerod Evans was sacked and he would fumble the ball. Notre Dame’s Jamir Jones recovered the ball, giving the possession back to Notre Dame.

The Irish would find themselves near the endzone with 6:51 to go in the quarter, but after three failed scoring attempts, ND would be forced to kick a field goal.

The score would stand at Notre Dame 10, Virgina Tech 0 at the end of quarter.

Notre Dame’s momentum continued into the second quarter. Right from the start, Kizer would throw it long to connect with Chris Finke for another Irish touchdown. ND on top 17-0 with 14:53 to go in the half.

With 11:28 to go before halftime, the Hokies would finally get on the board as Evans kept the ball and ran it for 23 yards to the endzone. ND 17, VT 7.

In the middle of the quarter, game officials would call a false start on Virginia Tech, but Hokies Head Coach Justin Fuente didn't agree with the call. His disagreement would result in an unsportsmanlike conduct penalty against him. This would push the Hokies back 15 yards.

The gap would continue to grow with 6 minutes left in the first half. Kizer would connect with Miles Boykin for an 18-yard touchdown. Yoon made the kick and the Irish go up 24-7.

There would be just over a minute to go in the half when Evans would find Virginia Tech's Cam Phillips down the field. The 16-yard play would result in a touchdown for the Hokies. The kick was good and VT tacks on an extra 7, Notre Dame 24, Virginia Tech 14.

The score would stay at Notre Dame 24, Virginia Tech 14 as the teams go into halftime.

The Hokies would start the third quarter off on a good note by taking five plays and 75 yards right to the endzone. The Hokies would be within a field goal of tying the game. However, the Irish held onto their 24-21 lead.

The quarter remained quiet until a pass from Evans would jump off the fingertips of his receiver and into the hands of Irish defender Drue Tranquill. This would make it possible for Adams to rush the ball 67 yards for another Irish touchdown. The Irish would stretch to a 10-point lead. Notre Dame 31, Virginia Tech 21.

With 13:35 to go in the game, the Hokies would come within field goal range and they would take advantage of that. Virginia Tech collects an extra three points to make the score 31-24 ND.

With 5:54 to go in the game Virginia Tech entered scoring territory and would kick a field goal to take the lead for the first time in the game. The score changes, 34-31 VT.

That lead change would end the game as Notre Dame could not answer the Hokies.

Bowl eligibility is no longer possible for the Irish.

The Irish will play their last regular season game Saturday, November 26th against the University of Southern California.