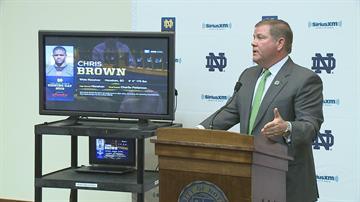 The Irish signed 17 players, 16 high school seniors, and one transfer from USC.

Quarterback Gunner Kiel took many by surprise when he early enrolled at Notre Dame for the spring semester, but Kelly said they still had faith.

"Honestly, we never really felt like we were done recruiting. There just seemed to be a connection there that we weren't ready to give up on,” said Kelly.
Kiel joins three others that early enrolled at Notre Dame, including transfer running back Amir Carlisle, defensive lineman Sheldon Day, and defensive back Tee Shepard.
Kelly said his coaching staff is keeping in close communication with the early enrollees to make the transition easier.
"We really think it’s an important two weeks. That transition is pretty large. They were in high school lunch now they're finding lunch on their own. It’s a whole different environment for them,” said Kelly.
The Irish Coach said all the new freshmen are expected to come in ready to play, and that the expectations don’t change whether you’re talking about Gunner Kiel or any other recruit.
“Because we had needs in this class, we clearly tell our freshmen, you better be ready to compete, no matter who it is. We don't set the bar any different for a Gunner Kiel than for anyone else. Come to Notre Dame if you want to compete, said Kelly.
Wide receiver Deontay Greenberry was expected to sign with the Irish, but instead signed with Houston. Kelly said he talked to Greenberry Tuesday night, and heard the news from Greenberry’s coach on Wednesday morning.
Kelly said some surprises just seem to be a part of the signing day process.
“I've had surprises, every single recruiting day. Some are good, some not so good. As it relates to this one, I’m happy about the guys that signed with us because they know why they're here,” said Kelly,
Some other signing day highlights. Kelly called wide receiver Chris Brown the steal of the draft, and said he loves the athleticism of Nick Baratti.
Kelly also called Tee Shepard the best cornerback in the country.
Notre Dame’s spring practices start March 21st.
Below is a full list of the 17 newest members of Notre Dame Football.
Early Enrolled Freshman
DL - Sheldon Day
QB – Gunner Kiel
DB – Tee Shepard
Players who signed National Letter of Intent
DB – Nick Baratti
WR – Chris Brown
LS – Scott Daly
WR – Justin Ferguson
OL – Mark Harrell
DL – Jarron Jones
RB – Will Mahone
OLB – Romeo Okwara
DB – C.J. Prosise
RB – KeiVarae Russell
DB – Elijah Shumate
OL – Ronnie Stanley
DB – John Turner
Transfer
RB – Amir Carlisle
Share this article: