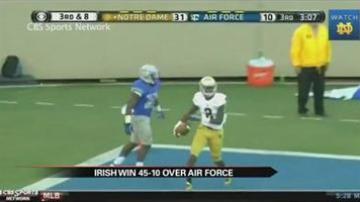 The Irish were tied in the first quarter, but took the lead in the second quarter.

Head Coach Brian Kelly said the freshman has a lot to learn.

"He did some pretty good things out there. But I think the thing that I would probably underline is he doesn't play like a true freshman out there," said Head Coach Brian Kelly.

Next weekend the Irish will play Navy at home.