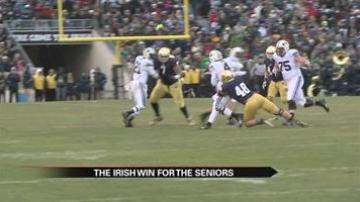 NOTRE DAME, Ind.-- Notre Dame played with heart for its seniors at Notre Dame Stadium Saturday and pulled off a victory 23-13 over BYU.

The Irish rushed for nearly 250 yards, with 470 yards in total offense. Head Coach Brian Kelly says defensively the Irish paid attention to detail, allowing them to keep BYU's points down.

Senior inside linebacker Dan Fox was an example of how the Irish played football Saturday, leading the defense with nine tackles and one sack.

"You can take that emotion into the game with you and I felt like a lot of our guys did that and that's why we played so well," Fox said.

On offense, running back Cam McDaniel led the team in rushing with more than 100 yards.

"As a running back that what you love, when you can get north and south and holes open up and we just kind of do our thing from there," McDaniel said.

And senior offensive lineman Zack Martin says he was happy to help McDaniel carry the ball.

"He's a hard-nosed runner. Anytime we can get a couple of holes, he's going to hit them hard and be successful, so this was his kind of game and it showed," Martin said.

Kyle Brindza sealed the deal for the Irish with three field goals, including the final, game-winning score. He says he was in Coach Kelly's ear all night, eager to go in and put points on the board.

Kelly said quarterback Tommy Rees was outstanding tonight and Rees says tonight's win is even sweeter coming off of a loss to Pitt two weeks ago.

"We are going to enjoy it, just like any other game, for about 24 hours.  We have got a tough one next week.  We've got to be ready to go but we are definitely going to enjoy this tonight and share this moment with my family and teammates.  Doesn't happen every day," Rees said.

They head to Stanford (9-2) next Saturday for the final game of the regular season. Stanford also won Saturday 63-13 over California.