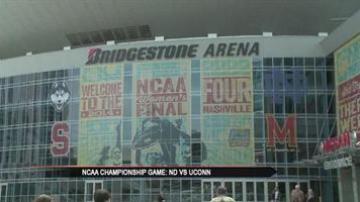 NASHVILLE, Tenn. -- After an undefeated season, Notre Dame's women's basketball team played their heart out in the National Championship game against UConn Tuesday night but were unable to pull out the win.

The Fighting Irish lost 79 to 58 against the UConn Huskies.

The team was forced to play without one of their top players, Natalie Achonwa, who suffered a torn ACL in her left knee.

The Irish had a rough start missing several shots in the first half which the Huskies capitalized on taking an early lead.  UConn’s Breanna Stewart scored 10pts and had 5 rebounds early on, putting the Huskies up by 12 at one point.

Towards the end of the half some Irish three point shots closed some of that gap ending that half down 38-45.

Coming out of the second half, the Irish only shot 25% from the field which contributed to UConn dominating the match up.

The Huskies ruled the boards with 54 rebounds.  Stewart, who only spent one minute on the bench, scored a total of 21 points for the Huskies.

Notre Dame’s star players, Kayla McBride and Jewell Loyd, put up a total of 34 points but were unable to catch up.

This was Notre Dame’s first loss of the season while UConn finished the season undefeated as back to back National Champions.