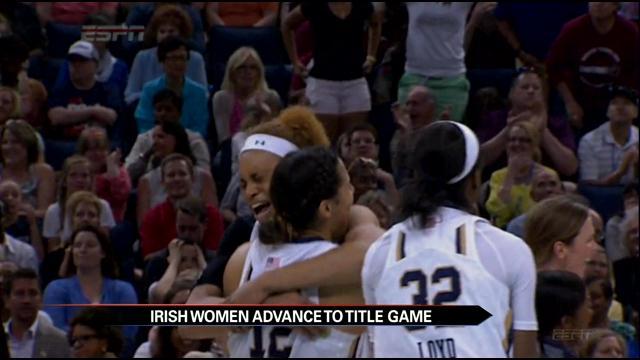 The Notre Dame Women's Basketball team is heading to the National Championship for the fourth time in the last five years.

The Fighting Irish took on the Gamecocks of South Carolina Sunday night in a Final Four showdown.

The game was expected to be a close one, and it ended up being just that.

Notre Dame got off to a quick start and never trailed throughout the entire first half.

Brianna Turner, Taya Reimer, and Jewell Loyd led the way with 10 points each in the first half alone, with Loyd ending the game as the leading scorer with 22 points.

The Gamecocks came out strong in the second half, tying the game up and taking the lead with little time left in the game.

Early foul trouble forced the Irish to play without Lindsay Allen for most of the game, leaving her with no points in the contest.

A blocked pass by the Irish and a missed last second shot by South Carolina sealed the victory for ND, but it was Madison Cable's only two points of the game that put Notre Dame ahead for good.

Some fans were breathing a sigh of relief after the nail-biter of a game, but others say they never doubted the Irish would come out on top. Some even said the women pretended to struggle to keep things interesting.

"We knew all the time it was a done deal. All the way," said Jim Howell, a Notre Dame fan.

"I thought at the beginning of the game we were going to blow them out. But I never got nervous once. Even when we were down one, I knew we were good," said Scott Johnson, another Irish fan.