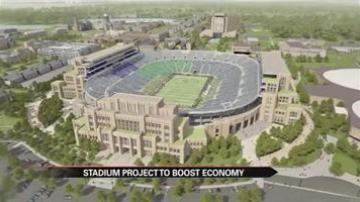 NOTRE DAME, Ind. -- The University of Notre Dame announced Wednesday that it plans a $400 million project that will add buildings and expand the stadium. The project is expected to help local contractors and boost the local economy.

The university is adding three new buildings to campus-on the east, west and south sides of the stadium. It's all part of a plan to integrate academics, athletics and student life.

Even those not connected with the university are excited about the announcement.

"We've had great partnerships with so many of the local contracting construction firms and so forth that I'm sure we'll continue to work with them," said Dennis Brown, Spokesman for the University of Notre Dame.

"We're running at about 20 percent unemployment. This is a huge deal for us in the St. Joe Valley building trades. It'll put a lot of our members back to work and give them a chance to provide for their families," said Kurt Meade, Plumbers and Pipe Fitters Local 172 Business Manager.

It will give them a chance to bounce back from the recession.

"They say the economy is in a state of recovery, but typically the construction industry is typically the last to rebound from recoveries," said Meade.

Construction is slated to begin within the next two years.

When the project is in full swing, there will be more than 300 workers on site each day.

"It's going to be an aggressive schedule. They're going to do it in under three years which is a big undertaking," said Meade.

"We may have to pull workers in from outside of the county not because folks here can't do it but just because sheer numbers," said Brown.

Meade says contractors in the area are up for the challenge.

"That's what we do here we train people. We just invested over a million dollars from our training facility just for situations like this so we're ready to take it on," said Meade.