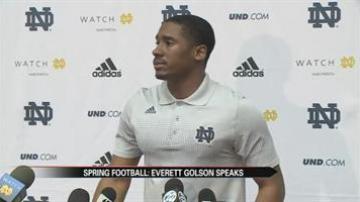 NOTRE DAME, Ind. -- Monday was the first day Notre Dame's football team set foot on the practice field since the end of the 2013 season. Practice was held at the Loftus Sports Center because of the weather.

It's a new season, with new coaches and a new quarterback for the Fighting Irish.

It was quarterback Everett Golson's first day back with his team after a year off-and his teammates and Head Coach Brian Kelly all liked what they saw.

Although Golson was all smiles when he took to the field, he wasn't ready to talk about why he left school.

"I'm not going to talk about that, I mean I kind of talked about that before, previously. I think now it's more so about me moving forward and like I said, getting back around the guys and learning as much as I can from Coach LeFleur and Coach Kelly," said Golson.

A few months ago, Golson admitted to Sports Illustrated that he cheated on a test.

"I had some time to really sit back and think on what I did and how I can move forward from that so I think I'm a different person because of it," said Golson. "I regret it in a sense but I think it allowed me to grow so much."

Moving forward, Golson says he is a better player and a better person.

"Everything I've been through, the training that I've had, I feel more mature for one, and a more polished quarterback now," said Golson.

Out on the field, Golson showed he is ready to be a leader. He brought fresh energy to the offense.

"Everett stepped in there and the tempo of the offense was outstanding. It was for a first day really exciting for me to watch him get back in there and look as though he was with us last year," said Kelly.

"It was great. Ev, again, talented athlete, great guy and just being able to have him back out there, it's a different dynamic," said running back Cam McDaniel.