Notre Dame's Koyack the latest candidate for Tight End U 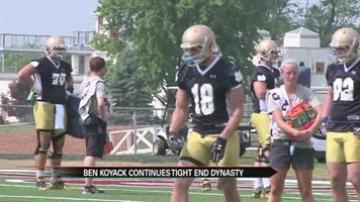 CULVER, Ind. -- The next candidate for the Tight End U club at Notre Dame is senior Ben Koyack. With Troy Niklas' departure to the NFL, he has big shoes to fill.

Kyle Rudolph, Tyler Eifert and Troy Niklas are just three Notre Dame tight ends who have been named as part of the tight end u club after being first or second round picks in the NFL draft.

On Monday we asked Ben Koyack if he's ready to continue this tight end dynasty.

"In all honesty I'm not really focusing on that right now, I'm more focused on working day by day so after this we'll go watch film, fix some mistakes I made today and hopefully come out tomorrow with another good practice and if not we'll just go watch more film and you can't ever get complacent, got to work as hard as you can everyday," said Koyack.

While continuing the tight end legacy wasn't on his mind, he said Head Coach Brian Kelly's expectations were. He knows Kelly wants him to put more points on the board.

"If that means blocking to try and open up holes then we'll do that, if he wants us to go run down the field, we'll do whatever he wants us to do and we'll do our best," said Koyack.

Koyack says his second priority is being a role model for the younger tight ends like sophomores Durham Smythe and Mike Heuerman.

"This summer we all got together. We kind of see each other as a squad. We always say it. So we really bonded together," said Koyack.

Koyack says camp is a good time to gel as a team.

While the team is mostly just practicing, the players said they also get to do some team bonding down in Culver while wake boarding and fishing.