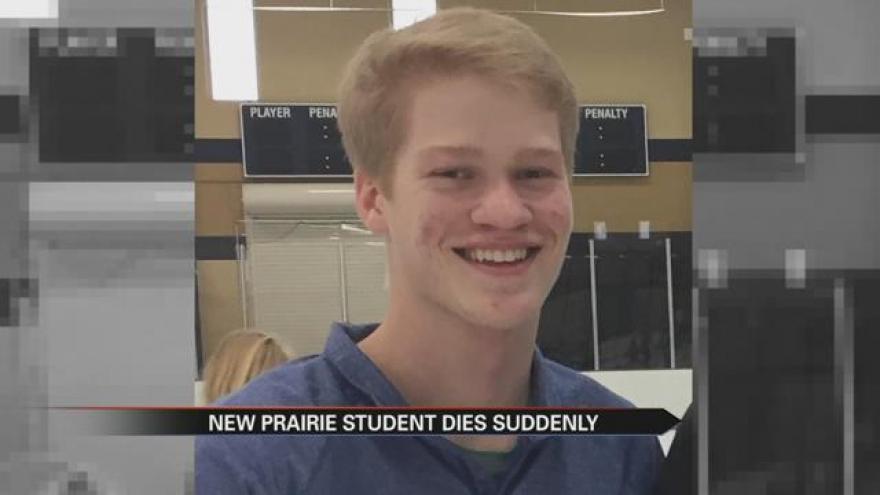 The teen, Mark Mayfield, was participating in an intramural basketball game and was found unresponsive in a hallway near the gym.

The student was then taken to a hospital and was pronounced dead by the emergency room doctor.

We are very saddened at the loss of this student. The New Prairie family is mourning his passing and we hope and pray that his family will take comfort in knowing the strength of all of our students and staff stand with them in their loss.

No foul play is suspected in the student's death.

The family says Mayfield has no known medical conditions, although he had been screened for heart issues for school athletics.

The results of those screenings were normal.

According to the school, grief rooms with counselors and clergy have been established at the school. "We have grief rooms ready for them and were just trying to take care of them and listening to what they want and follow their lead," said Jennifer Sass, New Prairie High School Principal.

Mayfield's parents ask for the continued thoughts and payers from the community:

The Mayfield Family is in great grief regarding Mark Mayfield’s sudden passing. No words can explain the depth of love his family has for him. He was a great athlete, a good friend, a wonderful son, plus one of the biggest Cub fans in the world. He reveled in their World Series victory.

The family is still waiting to hear more from the medical experts as to what exactly happened. Mark was in great physical health and had recently passed the heart screening set up for high school athletes.

Mark’s mother, father, four brothers, three sisters and his entire extended family send their appreciation to all the well-wishers. They would especially like to thank the LaPorte County first responders and administrators at New Prairie High School.  The Mayfield’s ask for your continued prayers and good thoughts during this very difficult time.

Fellow students of Mayfield say he was well-liked and funny.

"I remember him always making jokes. He talked a lot about baseball, he played baseball," said senior Heather Thomas. "It's sad seeing everyone like sad about him and stuff. Its hard. Being in school is just really hard right now."

An autopsy was scheduled for Tuesday afternoon to determine an exact cause of death.