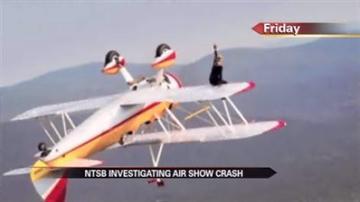 DAYTON, Ohio -- Investigators are looking into a deadly air show crash that happened in Ohio on Saturday.

A wing walker was performing when the plane abruptly crashed into the ground.

Both the wing walker and the pilot were killed in the accident.

The stunt woman talked to a news crew on Friday about her unique skill just one day before the crash.

"I'm probably one of the few in the world that actually will walk in front of the crowd along the wings of the airplane, no safety line," said crash victim Janet Wicker.

Wicker was an experienced wing walker and she was also a pilot. And she started performing in 1990.