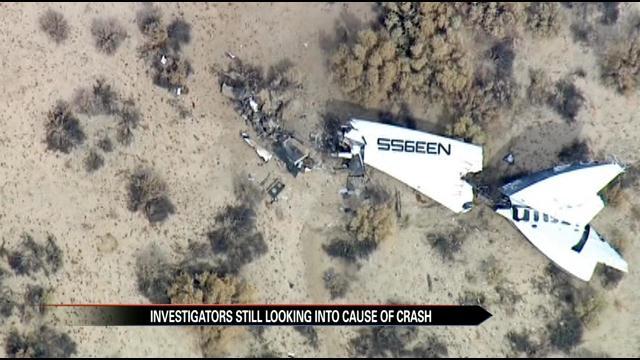 (CNN) -- The pilot killed in the Virgin Galactic's SpaceShipTwo disaster moved an unlocking device earlier than he should have, investigators said.

But that alone might not have caused the spaceship to disintegrate 45,000 feet in the air, killing co-pilot Michael Tyner Alsbury and injuring co-pilot Peter Siebold, who managed to parachute to the ground.

While the the National Transportation Safety Board said it is "months and months away" from determining the cause, it outlined two problems involving the spacecraft's "feathering" -- a process used to slow the spacecraft down toward Earth.

The NTSB has said the unlocking device was moved too early. On Monday night, the agency said Alsbury was the one who unlocked the feathering system.

"... the copilot, who was in right seat, moved the lock/unlock handle into unlock position; he did not survive accident," the NTSB tweeted.

During feathering, two pieces on the back of the vehicle -- the "feathers" -- lift up perpendicular to the spaceship, making the vehicle look like it's arching its back as it descends.

A team of 13 to 15 investigators from the National Transportation Safety Board will be in the Mojave Desert for about a week. But analyzing the data from the test aircraft will take much longer, and the investigation may take up to a year.

Friday's flight was the first to use a new plastic-based fuel, something that CNN aviation analyst Miles O'Brien has said could have affected the plane's stability, despite the fuel tanks being found intact.

But Virgin founder Richard Branson denied this, saying that 400 "of the best engineers in the world" were working on the project and that the risks were similar to those taken by people flying across the Atlantic in the 1920s and '30s.

A memorial fund has been set up for Alsbury's family.

He worked at Scaled Composites, the company that partnered with Virgin on the test flight program, and logged more than 1,600 hours as a test pilot and test engineer in Scaled aircraft.

Scaled Composites said Sunday that co-pilot Siebold -- the company's director of flight operations -- was alert and speaking with family and doctors.

Future of the program

For years, Virgin Galactic had planned to sell trips in which SpaceShipTwo would transport passengers about 62 miles above Earth -- the beginning of outer space -- and let them experience a few minutes of weightlessness before returning to the ground.

Virgin Galactic planned to send paying customers on SpaceShipTwo as early as next year and has sold more than 700 tickets, each costing more than $250,000, for future flights.

Friday's tragedy was not the first fatal accident to hit the Virgin Galactic space program. In 2007, three employees of Scaled Composites were killed during testing in the Mojave Desert. Sources told CNN that they had been testing components of a new rocket motor for SpaceShipTwo.

CNN's Susannah Cullinane and Rosalina Nieves contributed to this report.