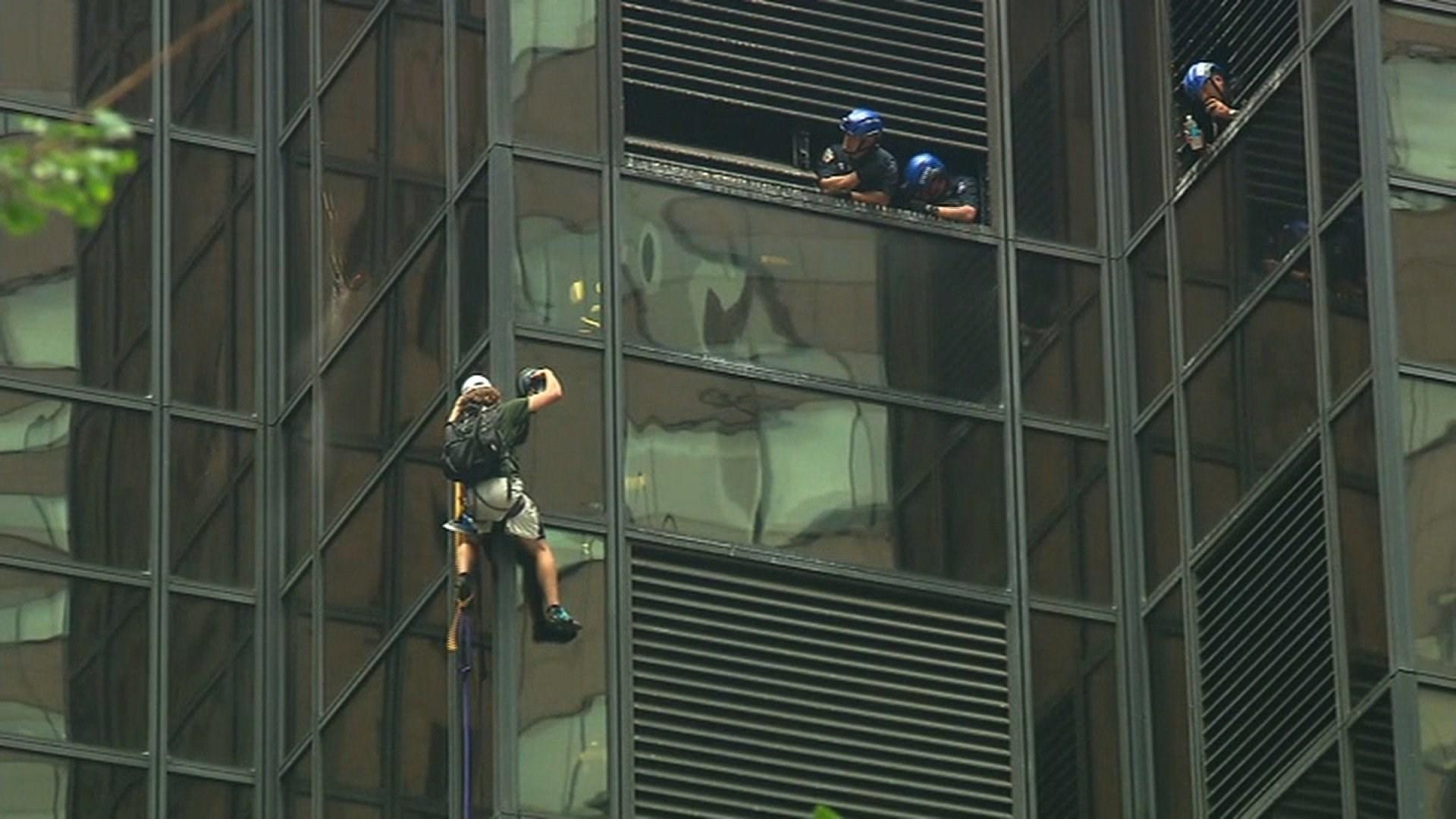 (CNN) -- A man scaling Trump Tower using giant suction cups was roughly pulled into the building at about 6:30 p.m. by members of the New York Police Department after reaching the 21st floor.

The 20-year-old from Virginia was arrested and taken to Bellevue Hospital for a psychological evaluation, according to a law enforcement official. The NYPD does not plan to release the name of the man who scaled Trump Tower until charges are "dropped or filed," according to Sgt. Brendan Ryan.

"What he explained to us is that he wanted a personal meeting with Mr. Trump and he posted a YouTube video on Tuesday," Bill Aubrey, Chief of Detectives with Manhattan South Precinct said at a press conference. "That YouTube video explains that he's an independent researcher and he wanted to meet with him (Donald Trump) and that's the reason why he was climbing this building. At no time did he express that he wanted to hurt anybody. His sole intention was to meet with Mr. Trump."

Emergency services detailed the almost three-hour operation in which crews tried to isolate the climber, after first trying to talk him down through a vent on the 5th floor.

When the long-haired man in a baseball cap and climbing gear continued to scale vertically and horizontally, emergency personnel removed window panes and lowered scaffolding from the roof of the building to eventually corner him near a two-feet thick glass window that would not support his weight, a police spokesman said.

Trump Tower is Republican presidential nominee Donald Trump's highest-profile property, and where his campaign is headquartered -- next to Central Park in Manhattan.

The real estate mogul was not in the building at the time of the climb, but on the campaign trail in Virginia.

Manhattan South Chief William Morris said his unit was in constant contact with the United States Secret Service during the ordeal.

His team was working with the Manhattan District Attorney's Office to determine which charges would be made.

"This man performed a ridiculous and dangerous stunt. There's damage to the building and he caused the unnecessary deployment of New York's finest to protect his safety and the safety of everyone in the building," said Michael D. Cohen, special counsel to the Trump Organization. "He's caused the shutdown of traffic on Fifth Avenue. I'm 100% certain the NYPD had better things to do. If Mr. Trump were here he'd be thanking law enforcement for the job they're doing and a job well done."

Police broke windows, raised a ladder and cut through a vent in attempts to talk to the climber.

Initially the NYPD said they had no immediate intention of trying to pull him in, according to a law enforcement source. Instead, they had hoped he would tire before reaching the top of the building.

The NYPD had set up two "airbags," one on the atrium below the climber and one on the sidewalk on 56th Street near 5th Avenue, according to Sgt. Carlos Nieves, of the deputy commissioner of public information office.

At about 5:45 p.m., Nieves said that the NYPD will "probably not" cut out any more window panes because the glass fell the last time and is dangerous. No one was injured.

But at 6:20 p.m., he said two windows have been removed from the 21st floor the NYPD Emergency Service Unit is attempted to talk the climber in.

And at about 6:30 p.m., two officers roughly hauled the climber into the window opening. The climber appeared to resist the maneuver but the officers successfully pulled him in.

Onlookers started documenting the man's ascent on social media shortly after 4 p.m., saying he had reached the 5th floor of the 58-story building on 5th Avenue. He was at the 16th floor around 5 p.m.

This isn't the first time a climber has ascended a building using suction cups.

French rock and urban climber Alain Robert used suction cups and a rope to climb the Galaxy Macau Tower in China to promote "The Amazing Spider-Man 2" in April 2014.

A similar feat was attempted by professional climber Sierra Blair-Coyle, who hauled herself up a 33-story building in South Korea in May 2016 with two vacuum cleaners to promote LG's newest CordZero model.

Science entertainment television program "MythBusters" investigated Hollywood heist scenes and tested whether it was possible to scale an air duct using suction cups in episode 54, which aired in July 2006.

Presenter Jamie Hyneman found suction cups were able to hold his weight but the noise of his contraption, which included a vacuum, were too noisy and blew his cover.

The man appeared to be relying on a series of NV11 Fairs Air Powered Suction Cups, which retail at $280.22 each.

The product is marketed as able to lift up to 150 lbs, being ideally suited to picking up glass or stone surfaces.