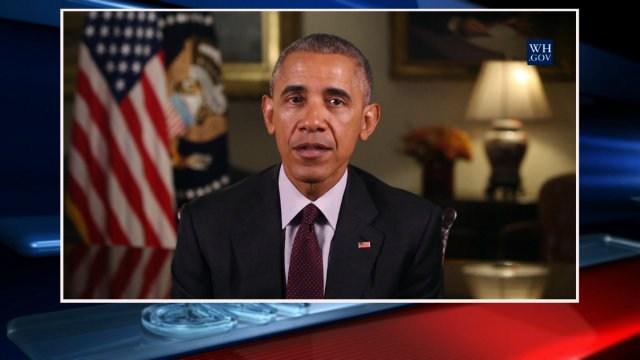 WASHINGTON (CNN) -- President Barack Obama called for unity in his final Thanksgiving address Thursday, just weeks after what he called the "sometimes divisive campaign" came to a close.

"As a country, we've just emerged from a noisy, passionate, and sometimes divisive campaign season," Obama said in his weekly address. "After all, elections are often where we emphasize what sets us apart. We face off in a contest of 'us' versus 'them.' We focus on the candidate we support instead of some of the ideals we share ... But a few short weeks later, Thanksgiving reminds us that no matter our differences, we are still one people, part of something bigger than ourselves."

Obama made nine phone calls to service members Thursday morning to thank them for their service.

For his part, President-elect Donald Trump, in his holiday message released yesterday, called for national unity as well and he vowed to bring the country together in common purpose.

But the wounds from the election are still fresh and liberal leaders are seeking recounts of the vote in three states -- Michigan, Pennsylvania and Wisconsin -- and some Democratic members of the Electoral College also have launched a last-ditch attempt to block Trump.

Protests have peppered the nation since the election amid reports hate crimes have spiked. A gathering of white nationalists and self-described "alt-right" leaders celebrating Trump's victory last weekend turned violent as protesters clashed with them and some supporters gave the Nazi salute.

Obama hinted at the racial strife in his message Thursday.

"Never doubt, that is what makes us American -- not where we come from, what we look like, or what faith we practice, but the ideals to which we pledge our allegiance. It's about our capacity to live up to the creed as old as our founding: "E Pluribus Unum" - that out of many, we are one," he said.

In a Thursday afternoon tweet, the President emphasized a unifying message.

"This Thanksgiving, we give thanks for our blessings, and work to fulfill the timeless responsibility we have as Americans to serve others."

And in a Facebook post Obama reflected on spending Thanksgivings in the White House, the commander in chief's residence that he'll be turning over to Trump on January 20.

"For me, this house has served as the backdrop to the tough decisions and trying times that often characterize the Presidency. But it's also been home -- it's where Michelle and I have watched our daughters grow into the funny, smart, humble, and extraordinary young women they are today."