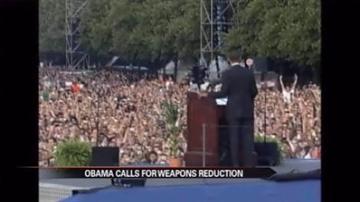 The President spoke at the iconic Brandenburg Gate in Berlin, a powerful symbol of the Cold War.

Both President Kennedy and President Reagan delivered famous speeches there but they addressed the opposite side of the gate, speaking to what was once East Germany.

"We may no longer live in fear of global annihilation, but so long as nuclear weapons exist, we are not truly safe," said Obama.

President Obama last visited Berlin in 2008 when he was running for office and 200,000 people showed up. This time about 4,500 were invited to the invitation-only speech.