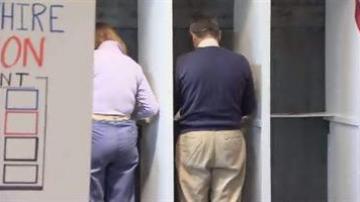 DIXVILLE NOTCH, N.H. -- The first presidential election results are in and it's a tie.

People living in a small New Hampshire town were the first in the nation to vote. Dixville Notch's election polls opened shortly after midnight.

It's been a tradition since 1968. President Barack Obama and his Republican rival Mitt Romney each received five votes.

The tie is a historical first.