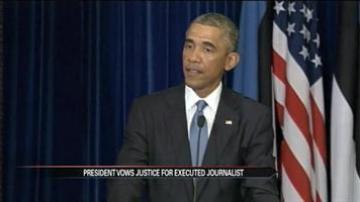 For the second time in just two weeks, President Obama somberly addressed the execution of another American journalist by ISIS militants.

“Steve's life stood in sharp contrast to those who have murdered him so brutally,” says Obama.

The president said horrific killings of innocents like Steven Sotloff and James Foley will only stiffen American resolve against this violent extremist group.

Investigators are comparing the voices from the two ISIS execution videos as well as looking at the scenery, the speaker's use of his left hand to hold the knife, and his eyes.

In Estonia Wednesday, President Obama laid down some rather tough talk about ISIS.

“Our objective is clear, and that is to degrade and destroy ISIL so that it's no longer a threat not just to Iraq, but also the region and to the United States.”

“Our objective is to make sure that ISIL is not an ongoing threat to the region.”

And fifteen minutes after that, even further back.

“We know that if we are joined by the international community, we can continue to shrink ISIL's sphere of influence, its effectiveness, its financing, its military capabilities to the point where it is a manageable

President Obama was vague about a timeline for any U.S. military action in Syria, where ISIS has flourished.

ISIS in the areas it occupies.