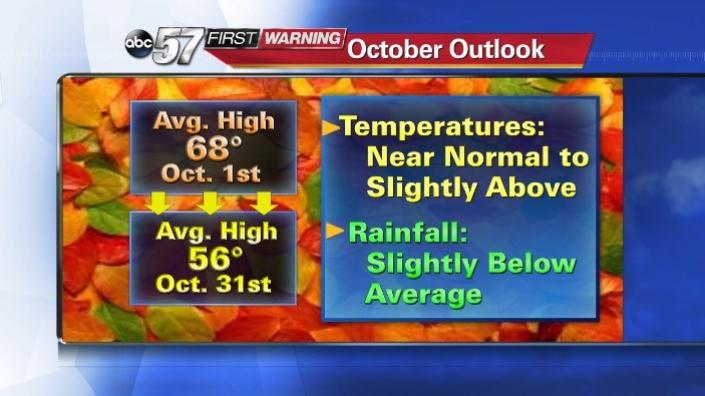 Now that overnight lows have dropped into the 40s and we’ve officially entered the month of October, it’s time to prepare for the first frost.  Frost can occur when overnight lows drop to 36°, but is more widespread when temperatures reach the freezing mark.

For 2015’s first frost, we can at least say it will not be record breaking for the earliest.  Fig. 1 breaks down the climatology by town, featuring Benton Harbor, Goshen, and South Bend.   The middle column shows the typical date in which we see that first frost.  Benton Harbor’s first frost typically occurs on October 8th, while the town of Goshen occurs on October 12th.  However, it’s a little tougher to freeze South Bend; its typical first frost is October 17th.

With those statistics in mind, we also need to look at last month and what it brought to Michiana in order to move forward.  September 2015 started off very warm, with three days stretching into the 90s within the first week (Fig. 2).  The combination of days in the 90s & 80s, which only totaled 11 out of the 30 days, was enough to consider September 2015 warmer than normal by 3.2° (the average monthly temperature including overnight lows was 67.1° according to the National Weather Service of Northern Indiana observed weather data for South Bend).

For October, the outlook looks very similar to September even though October 1st was slightly below normal in terms of high temperatures.  According to the Climate Prediction Center, temperatures will remain near to slightly above normal for October 2015.  What is normal?  For South Bend, normal highs start off in the upper 60s then drop to 56° by Halloween (Fig. 3).

Speaking of Halloween, that’s the average last day we see at least 70° as a high temperature (Fig. 4).  Will we reach that far into the month with 70s in the forecast?  Well, considering that we’ve already seen our last 90° day of 2015 on September 7th (nearly a week later the typical last day), our last 80° day was September 17th (at least two weeks before the normal last day), time will tell when we’ll see our last 70° high for 2015.  In the meantime, check back here for updates on your 10-day forecast and when we could expect the first frost here in Michiana for 2015.

Plus, as we continue to get crisp fall nights, we'll see the return of that colorful fall foliage.  In case you missed this update, click here for a timeline of when we'll be near and past peak.