Officer killed near Pittsburgh in especially deadly week for US police 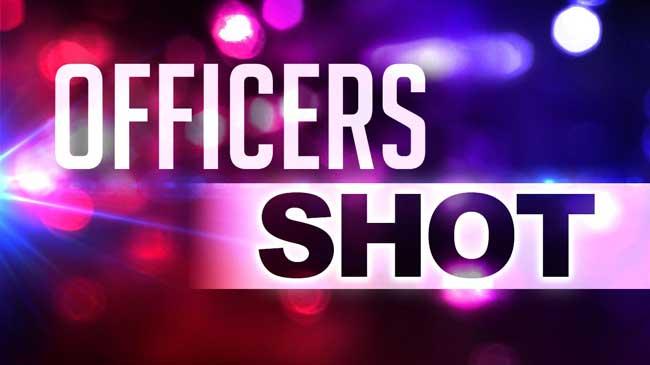 (CNN) -- A police officer was killed and another was wounded in a shooting outside a Pittsburgh-area home early Thursday, spurring authorities to evacuate homes and cancel school as officers searched for the shooter, officials said.

This is the seventh US police officer to be shot and killed in the last eight days, and the eighth to be killed in that time overall.

And the number of US and Puerto Rican police officers to be shot dead in the line of duty this year is now at least 57 -- that's 16 more than 2015's total, according to the National Law Enforcement Officers Memorial Fund.

Here's a look at an especially deadly eight days for police officers:

Two Canonsburg police officers were shot "as soon as they approached the front of the residence" in Canonsburg when they went to check a report about a domestic dispute, state police Trooper Melinda Bondarenka said.

One of the officers died of his wounds, the office of Washington County Coroner Tim Warco said. The condition of the other officer wasn't immediately released; neither were the officers' names.

Bondarenka said the officers were sent to the home at about 3:15 a.m. ET. An active "protection from abuse" order -- a restraining order issued by a judge -- is associated with someone in the home, Bondarenka said, without elaborating.

Homes in the area were evacuated after the shooting, Bondarenka said, and the Canon-McMillan School District canceled classes for the day.

"Please stay in your house if you're not being evacuated," the trooper said.

Canonsburg is about 15 miles southwest of Pittsburgh.

An eastern Arizona police officer was shot and killed as he and others confronted a man on Tuesday.

Officer Darrin Reed, 50, responded to a call about an unspecified disturbance in the town of Show Low when a man shot him at about 12:30 p.m., police said.

Reed was taken to a hospital, where he died of his injuries.

The man suspected of shooting Reed later was found in cabin in a nearby community, having taken a 15-year-old girl hostage there, police said,

The man, Daniel Erickson, sporadically shot at officers, hitting no one, during more than six hours of negotiations, police said. The standoff ended when officers returned fire and killed Erickson, according to police.

Reed was survived by a wife, a son and a daughter. Show Low is about 130 miles northeast of Phoenix.

Two sheriff's deputies in central Georgia were fatally shot Sunday as they responded to a dispute between neighbors, authorities said.

Peach County sheriff's deputies Patrick Sondron, 41, and Daryl Smallwood, 39, were called to a road near Byron, about 92 miles south of Atlanta, over the dispute. Police said someone with a gun had threatened two people who were riding a motorcycle and a four-wheeler up and down a street.

The gunman shot the deputies when they arrived around 5:30 p.m., the Georgia Bureau of Investigation said.

A Utah police officer was hit by a vehicle Sunday morning while trying to stop three people suspected of stealing a car, police said.

West Valley police Officer Cody Brotherson, 25, died after he was hit. He was outside of his vehicle trying to deploy tire spikes when the stolen car, with the three suspects inside, struck him in the Salt Lake suburb, according to police.

He left behind a fiancée, two brothers and his parents.

A New York City police sergeant was killed and another officer was wounded Friday afternoon in a shootout with a man suspected of breaking into a Bronx apartment, police said.

The slain officer, Paul Tuozzolo, 41, was a 19-year veteran of the department.

Police said the officers responded to a 911 call from a woman who said an armed man had broken into an apartment. The officers eventually found the man about a mile from the apartment, and the man shot at them, killing Tuozzolo and wounding Sgt. Emmanuel Kwo, police said.

Greene was found later that day in a different county, and was charged with two counts of murder.

"In all appearances it looks ... that these officers were ambushed," Des Moines police Sgt. Paul Parizek said that week. "These guys were gunned down sitting in their car, doing nothing wrong."