Officer taken to hospital after crash on New Road 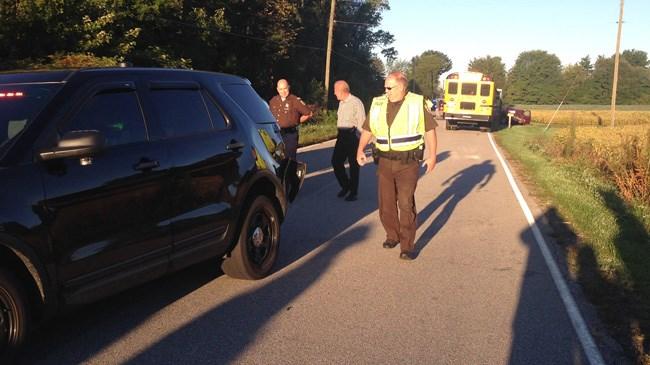 A St. Joseph County Police officer was taken to the hospital after he was rear-ended by another vehicle while responding to a call on New Road near Hickory Road Tuesday morning,

According to the St. Joseph County Police, Sergeant Corey Brothers responded to New Road to check on a stranded motorist.

He pulled up behind a vehicle that was behind the stranded motorist in the eastbound lanes.

At approximately the same time, the westbound lanes were slowed by a bus that had just picked up a student.

A driver in the eastbound lanes, Emma Johnson, didn't see traffic was stopped because of the sun and struck the back of Sergeant Brothers' unmarked vehicle.

Brothers' vehicle glanced off another vehicle in the eastbound lanes.

The first officers on the scene reported Brothers was in and out of consciousness so he was taken to the hospital.

Brothers was treated and released.

Johnson was also taken to the hospital with minor injuries. Her status is unknown.

The school bus was not hit and there were no students outside the bus at the time of the accident.

The students on board were about 25 minutes late getting to school because of the accident.