Officers injured, slain in what appear to be targeted shootings 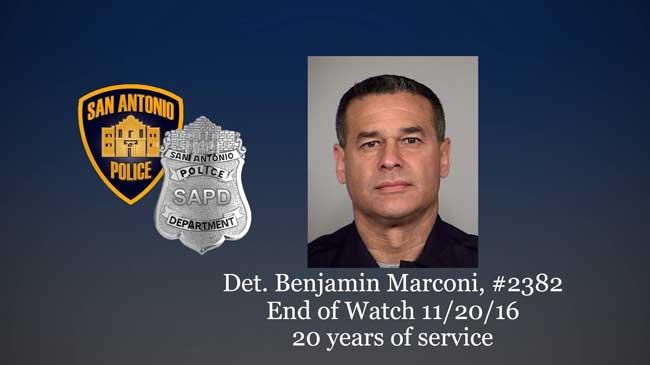 (CNN) -- Police are on high alert -- and in at least one city, mourning -- after four officers were shot Sunday in incidents around the country.

Perhaps most startling to law enforcement is that in three of the shootings, it appears the alleged perpetrators specifically targeted police officers, according to authorities and local media reports.

An officer in Sanibel, Florida, was shot in a drive-by as he conducted a traffic stop; a Gladstone, Missouri, officer was shot after a traffic stop that produced a foot chase and shootout; a 20-year veteran of the St. Louis Police Department was wounded in what authorities characterize as an ambush; and San Antonio Police Detective Benjamin Marconi was killed outside police headquarters in what appears to be another ambush.

Marconi's death marked the 58th fatal shooting of an officer this year -- well ahead of the number for all of 2015 (41) but not quite on pace to challenge the 2011 total of 73, according to the National Law Enforcement Officers Memorial Fund.

Police are still looking for the San Antonio suspect, while the St. Louis suspect was killed following an exchange of gunfire with police, authorities said. The suspect in Gladstone was killed as well, while the Sanibel suspect was taken into custody after a shootout at a golf-and-tennis community, local media outlets reported.

Here's what we know about each incident.

Marconi, 50, pulled over a driver outside police headquarters just before noon Sunday and, after addressing the driver, returned to his patrol car to write a ticket.

A man pulled up behind Marconi, exited his vehicle, approached Marconi's car and shot him in the head, McManus said. The suspect then shot Marconi again through the open window of the squad car, the police chief said.

"I believe the uniform was targeted," McManus said Monday at a news conference.

Marconi, who had spent almost half of his life on the force, was killed, and the suspect drove away. He is considered extremely dangerous, police say.

Investigators said the suspect is a slim black man in his 20s or 30s, wearing a hoodie and baggy pants. He's driving a black Mitsubishi Galant with chrome rims and tinted windows.

Investigators tracked down the suspect in the police shooting as he was riding in a friend's car, which officers attempted to pull over, according to police.

The alleged gunman darted from the car, firing once at police, before officers returned fire, killing the suspect early Monday, police said. A pistol with a high-capacity magazine was recovered from the scene.

Authorities did not identify the suspect, but St. Louis Police Chief Sam Dotson said the man was implicated in multiple robberies, a carjacking and a potential homicide. It's likely, Dotson said, that the suspect fired at the police officer Sunday night out of fear of being recognized as a suspect in the string of crimes.

Around 7:30 p.m. Sunday, the gunman pulled up to a marked police SUV and shot a 46-year-old officer twice in the head.

The wounded officer's gun was in his holster during the shooting, and the veteran sergeant and married father of three told police he saw a muzzle flash to his left and felt the glass window shatter against him, Dotson said.

The officer was in critical but stable condition, according to a late Sunday tweet from St. Louis police.

Just before 8 p.m. Sunday, an officer was working a traffic stop when a man drove by and opened fire, according to a police statement.

The suspect then drove to his home in The Dunes on Sanibel Island, a country club community, where he engaged police in a shootout before being taken into custody, police said.

Several media outlets, including CNN affiliates WINK, WBBH, WZVN and WFTX, reported that the alleged gunman was wounded, likely in the back and shoulder, during the shootout.

Resident Jeanne Vaughn told WINK she heard six gunshots during the search, which witnesses said included at least 20 police cars and a helicopter.

"I heard a police siren and then, (a) minute later I heard a bunch of shots. Bang, bang, you know, bang, bang, bang," Vaughn told the station. "And then I heard more police sirens and I see police coming up and down the streets."

According to WBBH, the officer, whose name CNN is working to confirm, was lauded as officer of year by the Lee County Bar Association. The officer earned the honor after using a defibrillator to save a woman's life, the station reported.

He has been treated and released from a local hospital.

The Gladstone Police Department officer who was shot late Sunday underwent surgery and is expected to make a full recovery following rehab, the department tweeted.

Because the officer was shot in Kansas City, of which Gladstone is a suburb, Kansas City police are fielding questions about the case. They could not immediately be reached for details.

According to CNN affiliate KSHB, the incident began with a traffic violation and routine stop. That is, until a teenage suspect took off running and officers gave chase.

The injured officer remained at the hospital early Monday, the Gladstone Department of Public Safety tweeted.

CNN's Max Blau and Emanuella Grinberg contributed to this report.