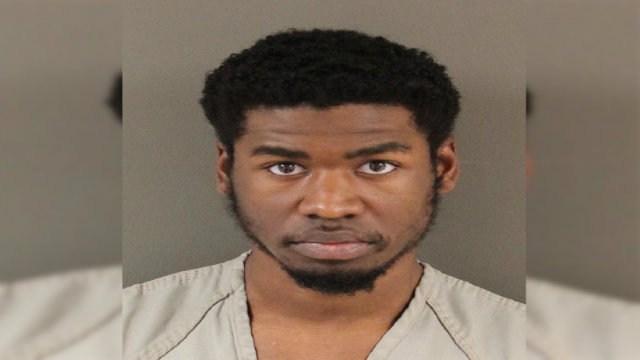 (CNN) -- A 20-year-old Ohio man was arrested Monday on suspicion of trying to join ISIS, the Department of Justice said.

Aaron Travis Daniels of Columbus faces a charge of attempting to provide material support to a foreign terrorist organization.

Daniels, also known as Harun Muhammad and Abu Yusuf, was arrested while trying to board a flight out of Columbus on Monday. Federal authorities said his ultimate destination was Libya, where he had planned to join ISIS.

According to the criminal complaint, Daniels sent $250 in January to an ISIS operative "and had communicated his commitment to violent overseas jihad."

Investigators said there was no reason to believe Daniels was trying to recruit others, CNN affiliates WSYX and WTTE reported.

Daniels was being held Monday without bond, but has a bond hearing scheduled for 9 a.m. Thursday, the affiliates said.

If convicted, Daniels would face up to 20 years in prison.

Daniels isn't the first American allegedly lured by ISIS, either to travel to the Middle East to join the fight or to commit acts of terrorism in the United States.

A man who stabbed 10 people at a Minnesota mall in September before being shot dead by a police officer was a "soldier of the Islamic state," according to an ISIS-linked news agency. Dahir Adan, who was dressed in a private security guard uniform, told acquaintances before the attack that they wouldn't be seeing him again.

James Medina was arrested in May after allegedly telling a confidential police informant about plans to detonate a bomb at a synagogue in Miami. The plan was an attempted act of sympathy with ISIS, according to court documents.

And last year, three Brooklyn men were arrested after they allegedly made plans to travel to Syria where they intended to help ISIS. Two of the men, Abror Habibov and Akhror Saidakhmetov, were arrested in New York; a third, Abdurasul Juraboev, was arrested in Florida.