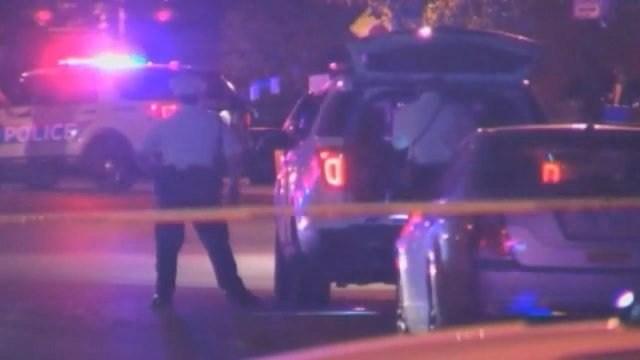 (CNN) -- A police officer shot and killed a 13-year-old robbery suspect in Ohio's capital after the boy pulled a BB gun out of his waistband, police said. City leaders said the shooting would be investigated thoroughly to determine whether charges are warranted.

Tyre King, who is black, died at a hospital after an officer, who is white, shot him several times Wednesday evening outside a house in east-central Columbus, police said. Earlier, police said the boy's name was Tyree.

King, an eighth-grader, had a BB gun that "looks practically identical" to the type of handgun that Columbus police carry, Chief Kim Jacobs said Thursday.

"This is the last thing that a police officer wants to do in their career. Unfortunately ... it becomes necessary at times to defend themselves," Jacobs told reporters.

The man who shot King, Officer Bryan Mason, a nine-year veteran of the force, will be placed on leave for at least a week during an investigation, Jacobs said.

Attorneys who represent the teen's family released a statement saying what police described is "out of his normal character."

Lawyer Sean Walton said there are witnesses who do not corroborate what authorities say happened.

"There are allegations that have been made regarding his actions, and those allegations cannot be taken as factual until a thorough, unbiased investigation has taken place," he added.

The chief and Mayor Andrew Ginther expressed condolences to the boy's family. They said the investigation into whether the officer's gunfire was justified will take time.

Ginther called the child's death troubling and said it should be a "call to action for our entire community."

"Why is it that a 13-year-old would have nearly an exact replica of a police firearm on him in our neighborhoods -- an eighth-grader involved in very, very dangerous conduct in one of our neighborhoods?" Ginther said.

"A 13-year-old is dead in the city of Columbus because of our obsession with guns," he said.

Neither Ohio nor the city of Columbus restrict possession of guns like BB guns -- which use air instead of gunpowder to project ammunition -- by age.

The shooting happened after a man told police that a group had pulled a gun on him and stole an unspecified amount of money, police said.

Officers eventually saw three people matching the alleged robbers' descriptions, and two of them -- including King -- ran, police said. When officers caught up to them and tried to arrest them in an alley, King pulled what appeared to be a handgun from his waistband, and Mason shot him, police said.

The weapon turned out to be a BB gun with a laser sight attachment designed to help a shooter's aim, according to police.

At Thursday's news conference, Jacobs held a picture of an example of the type of BB gun she said was involved.

The gun "turns out not to be a firearm in the sense that it fires real bullets, but ... it looks like a firearm that can kill you."

A person who was with King was interviewed and released pending further investigation. Others are being sought, police said.

The shooting reverberated on social media.

Some came to the officer's defense, saying it would have been hard for him to discern quickly the difference between the BB gun and a more lethal firearm. Others lamented what they see as officers shooting without justification.

Still others, including Green Party presidential candidate Jill Stein, drew parallels between King's death and that of Tamir Rice, a 12-year-old black boy who was shot and killed by a police officer in Cleveland in November 2014.

Rice was drawing an airsoft gun from his waist when Officer Timothy Loehmann, who is white, fired the fatal shots within two seconds of arriving outside a recreation center where the sixth-grader was, a prosecutor said. The boy died a day later.

Loehmann, who'd been called there after a 911 caller reported seeing someone with a pistol that might have been fake, said he thought the boy appeared older and had a real gun. Police said the orange tip that distinguishes air pistols from real ones had been removed from the gun.

A grand jury in 2015 chose not to indict the two responding police officers.

On Thursday, a reporter asked the Columbus police chief to respond to those who would say King's death is similar to Rice's.

"I don't know how they would know that," Jacobs said. "We don't have enough facts to know anything about how this relates to any other shooting, including Tamir Rice's."

Rice's shooting was captured on a surveillance camera. Columbus investigators are trying to determine whether there were any cameras in the area of King's shooting.

Jacobs said Mason's future with the department beyond the period of administrative leave depends on the investigation. Mason will need to see a psychologist before being allowed to return to duty, she said.

"I will not let an officer out on the street to perform their job if I do not trust them," Jacobs said.

She said results of the investigation would be sent to the county prosecutor, whom she expects will convene a grand jury to determine whether charges should be filed against the officer.

Mason has shot and killed someone while on duty before. In 2012, while responding to a 911 call at a Columbus home, Mason fatally shot an armed man, said Weiner, the police spokesman.

The officer's actions were found to be within policy, so Mason was not disciplined, Weiner said. The police department gave Mason an award for bravery in 2010.

The family said in its statement that King was a boy who liked what a lot of teenagers liked. He played football, hockey and soccer and did gymnastics.

"Tyre was a child who was loved and cherished by his family," attorney Chanda L. Brown said.

Diego Hansard, a cousin, said King was a laid-back teen who wanted to have fun, but was already planning for his future.

"He was light years ahead of people his age," Hansard said. "He's 13 and talking about how he wanted to own a business. He talked like a person who envisioned a brighter future."

Ohio only regulates air guns in rest areas and roadside parks. State law bans the exhibition, use or firing of pellet, BB and airsoft guns in those areas.

According to the Law Center to Prevent Gun Violence, 23 states and the District of Columbia regulate non-powder guns and 11 of them place age restrictions.

Hannah Shearer, a staff attorney for the San Francisco-based organization, said the mass proliferation of all types of guns in public spaces leads to disastrous problems. And one factor about air guns compounds the dangers, she said.

"Their proliferation in public is dangerous for the same reasons traditional firearms are, but also for an additional reason: they endanger kids who carry them in instances where someone (like a police officer) mistakes it for a different type of weapon," Shearer said.

The US Consumer Product Safety Commission says about four people are killed each year by BB or pellet guns. It recommends that children younger than 16 not be allowed to shoot such guns.