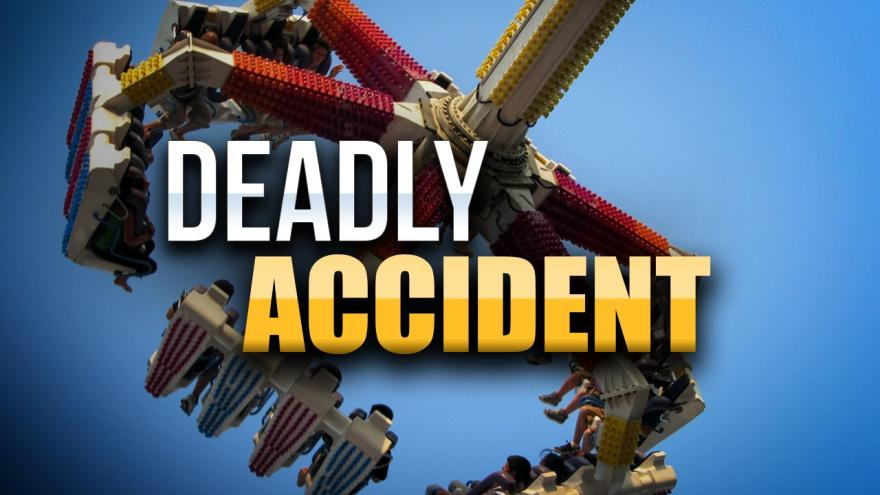 (CNN) -- Before Ohio fairgoers were hurled off the Fire Ball, the ride was inspected multiple times. And it passed.

"It's been looked at about three or four times over the course of two days," said Michael Vartorella, chief ride inspector for Ohio's Division of Amusement Ride Safety. "It was inspected at a couple of different stages and it was signed off" on Wednesday.

So what caused the 40-foot structure to break apart on opening night at the Ohio State Fair, killing one person and injuring seven others?

To answer that question, Ohio State Highway Patrol Superintendent Col. Paul Pride said investigators were enlisting outside experts to conduct what he described as an "autopsy" of the Fire Ball, which sits broken at the fair.

The ride, which has at least six rows of seats that spin around in the air as the entire structure moves like a pendulum, broke apart while Photo courtesy Loozrboy / Flickr / CC BY-SA 2.0
it was in motion on Wednesday.

A video posted online appears to show several people on the Fire Ball seconds before parts of the structure, including a full row of seats, split up and fell.

The investigation is in its early stages, but several officials left open the possibility that the collapse was an accident with no clear blame.

"It's important to remember that amusement rides are mechanized pieces of equipment," said Ohio Department of Agriculture Director David Daniels. "They can fail from time to time."

Gov. John Kasich said the situation was a "nightmare," but noted that "accidents happen."

"You can inspect, and you can reinspect, and you can in this case have a third party inspect," Kasich said. "But if you're looking for guarantees in life, they don't exist. You just make sure that the risk you take on is something that you balance against the activity you want to engage in."

KMG, the Dutch company that makes the Fire Ball, instructed amusement park operators to cease operation of the Fire Ball and similar rides until further notice as the company investigates the incident, according to a statement posted to its Facebook page.

'Landing on their backs on the concrete'

Kaylie Bellomy was moments away from getting on the Fire Ball. She was waiting in line when the tragedy happened.

"Everybody was running. I got ran over trying to get out of the way," she told CNN affiliate WCMH. "I just don't think I'll ever ride a ride ever again."

Rhonda Burgess said one of her sons was standing in line at a nearby ride when the Fire Ball came undone.

"The ride had four riders per cart. This piece snapped off and the riders came out of the cart," she said. "At least two (people) flew through the air at least 20 feet before landing on their backs on the concrete."

Deputies rushed to the scene and asked fairgoers to step back.

Video footage showed the chaos and horror of witnesses. "It's my worst nightmare!" one person screamed.

Kasich ordered a full investigation and ordered all fair rides to shut down amid another round of inspections. The rides will reopen once those inspections are complete, Daniels said Thursday.

Tyler Jarrell, an 18-year-old from Columbus, Ohio, was pronounced dead at the fairgrounds, the Ohio State Highway Patrol said. Seven others, ranging in age from 14 to 42, were injured and transported to area hospitals.

Some of those injured were on the ride that collapsed, and others were struck by debris that came off the machine, Pride said.

Three people were being treated at Wexner Medical Center in Columbus, with two in critical condition and one in serious condition, hospital officials said Thursday.

At Grant Medical Center in Columbus, one person remains in serious condition, and two people have been discharged, medical officials said.

David Evans, medical director of Wexner Medical Center, said it was helpful to see video of the incident that was posted to social media because it helped the staff look for certain types of injuries.

"Having that video really showed us that this was a great force and a great mechanism, really consistent with a high-speed motor vehicle crash with an ejection, really something more along those lines," he said.

There were an estimated 30,900 injuries associated with amusement attractions seen in emergency departments in 2016, according to Patty Davis, press secretary for the US Consumer Product Safety Commission.

Since 2010, there have been 22 fatalities associated with riders of amusement attractions, Davis said.

For days, inspectors had overseen the assembly and then inspected about 70 rides ahead of opening day.

"My children, my grandchildren ride this equipment so our guys do not rush through this stuff," Vartorella said.

Four rides failed an inspection on Monday, but there were no red flags when inspectors examined the Fire Ball.

The Fire Ball is described as an "aggressive thrill" and has become one of the most popular thrill rides since its debut in 2002, according to Amusements of America, the ride's operator.

In the wake of the tragedy, the Indiana State Fair announced it would not operate the Fire Ball ride at its fair. In addition, all Illinois county fairs were directed by the state's Department of Labor not to operate any similar rides from KMG, the Dutch company that makes the Fire Ball.

"This is a place where we come, we smile, we laugh, we eat, we do just great things, we ride the rides, we do all the things that people do at a fair," Kasich said.

Most activities were to resume Thursday while the rides undergo new inspections, fair officials said.

"Our hearts are heavy for the families of those involved in last night's tragic accident," they said in a statement. "We have shut down all rides until the state has inspected each and every ride again and deemed them to be safe."