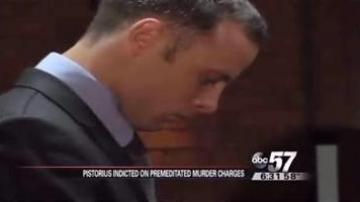 PRETORIA, South Africa — A South African court has indicted sprinter Oscar Pistorius for the murder of his girlfriend, Reeva Steenkamp. He was also indicted on illegal possession of ammunition.

Monday would have been her 30th birthday.

Pistorius said he mistook her for a home invader.

The lawyer for Pistorius says the Olympic sprinter's trial will begin next March.