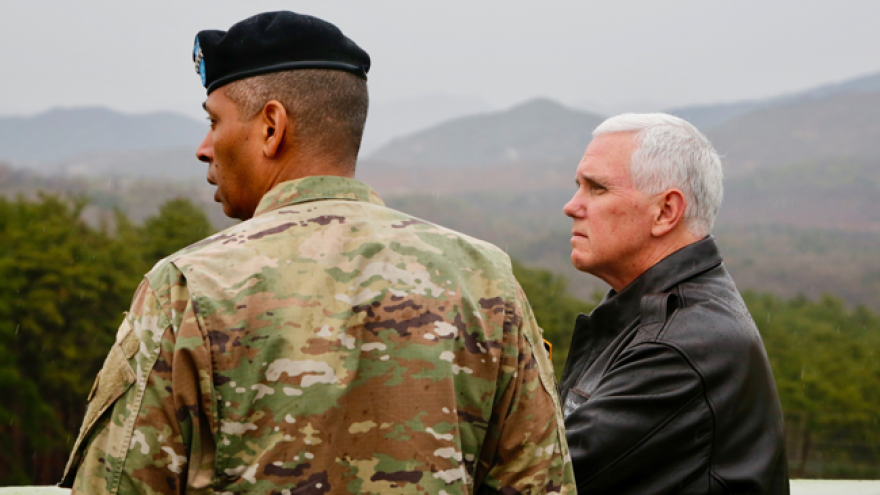 PANMUNJOM, South Korea (CNN) -- With North Korean soldiers standing less than 100 feet behind him at the Korean Demilitarized Zone, Vice President Mike Pence told CNN that Pyongyang should understand that the Trump administration's approach toward the regime will be different than that of past US presidents.

"We're going to abandon the failed policy of strategic patience. But we're going to redouble our efforts to bring diplomatic and economic pressure to bear on North Korea. Our hope is that we can resolve this issue peaceably," Pence said in an exclusive interview at the DMZ.

To achieve this new strategy, the administration is relying heavily on China, a country President Donald Trump spent his entire campaign railing against, but has since stopped as it became clear North Korea would be a top priority requiring China's help.

"I know the President was heartened by his discussions with President Xi (Jinping). We've seen China begin to take some actions to bring pressure on North Korea but there needs to be more," Pence said.

Chinese foreign ministry spokesman Lu Kang said in a daily briefing Monday that the onus was on all parties -- including the US and China -- to reach a peaceful solution.

"Resolving this issue requires all relevant parties, especially parties that bear major responsibility and play a key role in this issue, to work in the same direction and make a joint effort," he said.

The North Korean regime began its nuclear program in earnest during the Clinton administration, which tried to prevent its buildup with a diplomatic agreement.

It ultimately failed after Pyongyang violated it by continuing its nuclear buildup. Later, the Bush administration tried global pressure with the so-called "six party talks," but those failed too, and North Korea launched its first nuclear test in 2006. During the Obama administration, the regime launched four more nuclear tests.

Now, some estimates are that North Korea may have the capability to launch a missile that could hit the continental US by the year 2020.

Asked about that, Pence paused for several seconds before answering.

"I know the President of the United States has no higher priority than the safety and security of the American people. The presence of US forces here in South Korea are a long-standing commitment to the Asia Pacific. And insuring the security of the continental US will be a priority in this administration.

"Look, we want to be clear: our hope and frankly our prayer is that by marshaling the resources of nations across the Asian Pacific -- not just South Korea, Japan, other allies -- and China bringing renewed pressure to bear," he said.

The plan was for the vice president to stay inside the glass enclosed Freedom House at the DMZ and not step outside towards the military demarcation line (MDL), where North Korean soldiers are standing.

However, once there, Pence declared he wanted to go outside -- and so he did just that. As the vice president stood and looked on, North Korean soldiers quickly came out on their side of MDL and began taking pictures of Pence.

Military officials here told CNN in advance that snapping photos is what North Korea does when seeing VIPs across the way -- both to document their presence and intimidate.

Most US dignitaries go even closer to the North Korean side when here -- to a set of blue buildings called conference row that spans the MDL and allows them to actually step foot in North Korea. For security reasons, Pence did not.

He did, however, go to Observation Point Ouellette, a lookout post from where not only are the North Korean hills visible, but its propaganda machine can be heard -- music and political messages blast there across the DMZ.

For the vice president, this first trip to the Korean Peninsula is an emotional one. His father, 2nd Lt. Edward J. Pence, Jr., US Army, was awarded the Bronze Star for his service in the Korean War.

US military officials prepared a briefing for Pence about the so-called Battle of Pork Chop Hill, where his father earned his medal.

"It's very meaningful for me and my family to be here. So many years after my father's service. To be honest with you, my dad didn't talk about his combat experience much until we were all grown up. It was a lot of tough fighting here," Pence told CNN.

"I think, in some way, my Dad just might be smiling from heaven to see the sacrifices that he and other American soldiers and South Korean soldiers made here are now passed on to my generation. That's not changed out our commitment to the secure and prosperity of South Korea."