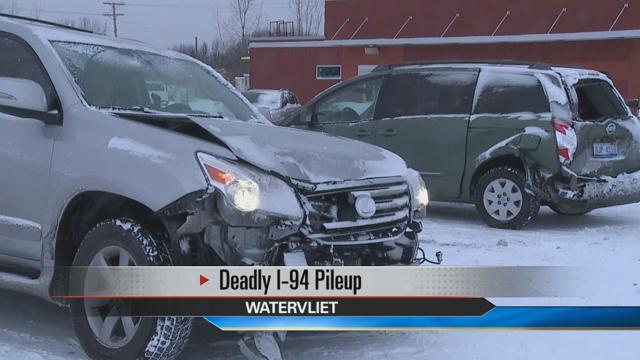 Van Buren County dispatch confirms one person has died and several others were injured in several serious crashes that happened on I-94 Sunday afternoon.

The initial crash happened around 2:00 p.m. involving eight vehicles and one semi-truck on eastbound I-94 near mile markers 46 and 47 by the Hartford exit.

Police say drivers directly behind the crash were able to stop safely and not collide or lose control.

As traffic began to backup, about a quarter of a mile west of the initial crash, two semi-trucks collided.

42 other vehicles then crashed after police say cars were traveling at speeds too high for road conditions.

Police say this crash resulted in one death.

Michigan State Police initially said there were 2 fatalities, however one person was revived by paramedics on the way to the hospital. That person is in a critical care status.

At the same time, a minor injury crash involving 6 cars and 6 semis happened on the westbound side of I-94 about 1 mile east of Hartford due to high speeds and drivers following each other too closely, police say.

Michigan State Police also say a Van Buren County deputy was assisting a man with a broken leg outside of his vehicle and the officer was struck by a car but that his injuries are non-life-threatening.

Injured drivers and passengers were transported to Hartford Federated Church where the Red Cross is assisting.

I-94 was closed off in both directions for about 6 hours until 8:20 p.m. while law enforcement, wrecker services, and Michigan Department of Transportation investigated and cleared the scene.

Drivers and passengers of the vehicles involved explained the scene as chaotic.

“Conditions went to white out. We tried to stop with no success before hitting the people in front of us and then we got sideswiped by a semi on the driver side and another car hit us on the front end again," said driver Jim Borsum.

The initial investigation indicates the cause of the crashes was drivers traveling too fast for the road conditions, following too closely, and low visibility.

“When people are traveling too fast and leaving a small distance between them and the vehicles in front of them traffic crashes occur," said Lt. Logan.