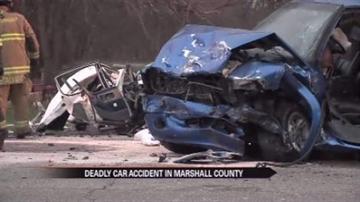 PLYMOUTH, Ind. -- A deadly car crash in Marshall County Wednesday left one man dead and two others injured. It happened just after 6 p.m. on Michigan Street, near 5th Street outside Plymouth.

Neighbors living nearby say it is one of the most horrific crashes they have ever seen. One of the cars involved nearly split in half.

"I just heard a big bang or boom," said Phyllis Wright. "I got up, looked out, saw that car and thought oh my God."

Seconds after the crash, neighbors saw a car and an SUV that was barely recognizable.

"It just made my stomach sick and I didn’t even know the person, I feel sorry for them," said Wright.

Wright and her husband watched helplessly as firefighters worked to free the couple trapped in one of the cars.

After nearly 45 minutes, the woman passenger was rushed to the hospital in critical condition. The driver died at the scene.

Just a few feet away, the driver of the SUV was also rushed to the hospital. The extent of his injuries are still unknown.

"This is the first bad one [accident] we have had for 20 years," said Wright.

Neighbors say this is normally a safe stretch of road and still do not know what could have caused this deadly accident.

However, drivers that witnessed the crash say they saw the SUV cross over into oncoming traffic and hit the car head on.