One man arrested after a meth lab bust in Fulton County 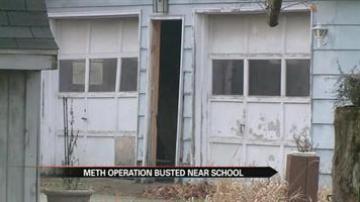 FULTON COUNTY, Ind.-- One man is behind bars after a meth lab bust near downtown Rochester. 24-year-old John David Wentzel was arrested on several charges including operating a meth lab 1,000 feet from a school.

Rochester Police said this is just one example of the larger meth issue.

Andy Shotts said, “They can be making meth in a backpack, walking down the street, and you would never know it.”

Neighbors on Franklin Street in Rochester were upset when they found out meth was being made in their backyard.

Heidi Shepherd said, “Pretty scary because I have my son here and my sister lives up front… she’s got kids. There’s kids all over this neighborhood.”

Over the weekend police cleaned up the chemicals from Wentzel's meth lab.

Shepherd said, “I knew he was a dealer, but I didn’t know he was actually dealing meth. I heard rumors he was cooking, but nothing for sure, until he got busted.”

Shepherd said there was a bad odor coming from his property.

Shepherd said, “I can’t even describe the smell. It’s chemicals and you can smell it. I could smell it all the way up to my house!”

The Rochester Police Department said it was more difficult to make meth five years ago.

Police think the availability of cold medicine in Indiana is a leading cause for the increase in "one pot" operations.

Shotts said, “It’s typical of what we are seeing right now. For every 1 meth lab we find, there’s probably 25 that we don’t.”