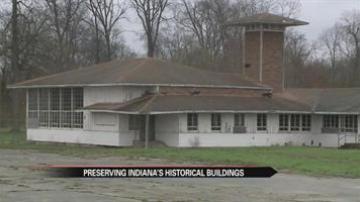 KINGSBURY, Ind. -- In 2013, the Walkerton Presbyterian Church and the Kingsbury Ordnance Plant Employment Office were placed on the Ten Most Endangered list released by the organization Indiana Landmarks in 2013. The result? One was saved, one was not.

The Kingsbury Ordnance Plant Employment Office has a new owner, but the Walkerton Presbyterian Church was razed after the town couldn't raise the funds to save it.

"There just becomes a point where you can only do so much," said Karol Jackson, President of the Walkerton Town Council.

It wasn't an easy choice for Jackson -or anyone - to make.

It's the decision that made the most sense financially.

It was vacant and crumbling for decades.

"It was infested, things had started to fall off of the building. It was becoming a hazard," said Jackson.

At the Kingsbury Ordnance Plant, employees made millions of rounds of ammunition and helped lead the US to victory in World War II.

"I hate to tear down these things that have historical significance," said Edgar Lindborg, the new owner of Kingsbury Ordnance Plant.

Lindborg purchased the building and the land surrounding it in February. He is looking to expand his grain elevator business, but isn't sure what to do with the office, which was designed by Frank Lloyd Wright's son, John.

"If it's restorable, maybe that's something we'll look at in the future," said Lindborg.

While the building has survived another year, Lindborg says it's too early to know what happens next.