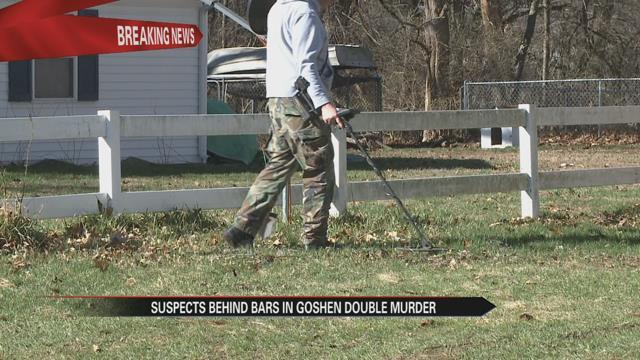 Two suspects in the double murder in Goshen have been named and are in police custody.

“The Goshen Police they investigated this case pretty hard because they were here like three days, day and night,” says a neighbor on Ripple Rock Drive in Goshen.

While being tight lipped all week the department sent out a statement Wednesday afternoon saying, “We are confident the investigation will be brought to a successful end and though it can never fill the loss felt by the Nava and Carmona families, we hope it may bring them even the smallest amount of closure.”

On Thursday the Nava family did not answer their door.

The Carmona family was on their way back from the Mexican Consulate in Chicago.

They are working to send Macro’s body back home.

They say they did not know the two suspects and feel safer hearing of the arrest.

“I’m not feeling unsafe in this neighborhood at all, I never did feel unsafe,” says Danielle.

Danielle lives near the crime scene and says she has not experienced random violent crime in here two years there.

According to this press release from the Elkhart County Prosecutor’s Office, in April of 2013, Ramos was held on preliminary charges of attempted murder and criminal gang activity.

This was related to a drive by shooting here on Middlebury and School streets.

The Prosecutor’s Office declined to file formal charges. They explained that the case had not been sufficiently developed to warrant charges.

But on Thursday morning Ramos was under investigation again.

Goshen Police were at his Elkhart home looking for evidence.

Visitation for Jose Nava-Orozco will be from 2 to 9 p.m. Friday, March 18, at Rieth-Rohrer-Ehret Funeral Home, 311 S. Main St., Goshen. The funeral service will be at 1 p.m. Saturday, March 19, at St. John the Evangelist Catholic Church, Goshen. The Rev. Fernando Jimenez will officiate. Burial will be in Sugar Grove Cemetery.

Visitation for Marco Carmona-Gonzalez will be from 5 to 7 p.m. Saturday, March 19, at Rieth-Rohrer-Ehret Funeral Home, 311 S. Main St., Goshen.