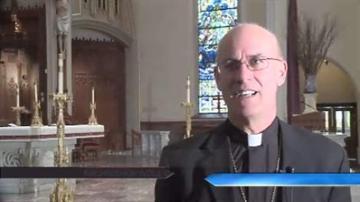 FORT WAYNE, Ind.--Bishop Kevin C. Rhoades is the ninth bishop of the Fort-Wayne/South Bend diocese. He says he was glued to the television waiting for that white smoke--just like everyone else.

He's led the Fort Wayne/South Bend diocese for a little over three years and Bishop Rhoades waited for white smoke just like everybody else.

"I was in the office and a lot of the diocesan employees we all gathered together to watch it on TV in one of our conference rooms," said Bishop Rhoades.

The white smoke billowed from Sistine Chapel and then an hour long wait resulted in the first pope from the Americas.

"I think we were all surprised when we saw the announcement of our first Latin American pope Cardinal Bergoglio, Pope Francis I."

The son of an italian immigrant, Pope Francis hails from Argentina and studied in Germany. But most importantly--Bishop Rhoades says he's a man of the gospel.

"You can see that in the choice of his name, Francis. Who lived the radicalism of the gospel."

Because of his Jesuit background, Pope Francis has already been criticized for his conservative beliefs. His strong traditionalism also means he might actively travel and spread the word of God.

"He'll continue the legacy of Pope Benedict for the new evangelization. The importance of new energy, new ardor, and new methods to bring the gospel into the world today."